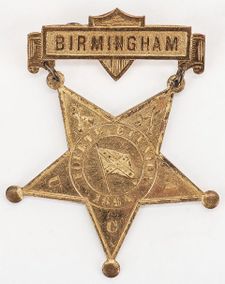 A souvenir medal from the 1894 UCV Reunion

The 1894 Reunion of the United Confederate Veterans was a city-wide event to honor the service of Confederate veterans of the Civil War and the 4th annual meeting of the United Confederate Veterans organization. It was the first of three such national reunions to be held in Birmingham. The event had been delayed from the previous year for financial reasons, but was successful. A reported 20,000 visitors arrived in the city for the opening of the festival on April 25, 1894, with as many as 30,000 visitors in the city by the next day, celebrated as Memorial Day for the Confederate dead.

Governors of five states, including Thomas Jones of Alabama, attended the festivities. The specially-erected Winnie Davis Wigwam, holding 10,000 at the corner of 23rd Street and 1st Avenue North, was filled to overflowing. Over 500 camps were represented at the roll call. The cornerstone of the Confederate Soldiers and Sailors Monument at Capital Park was laid and the graves of veterans at Oak Hill Cemetery were decorated.

Evening entertainments included the "Tableaux of States" featuring the "prettiest young unmarried women" from each Southern state depicting scenes from the Secession, War, and Reconstruction. The concluding tableau depicted the states unified under the banner of the United States. American and Confederate flags were given equal prominence in decorating the city and the ties of Union were emphasized along with Southern glory in speeches and resolutions.

Mayor David Fox welcomed the guests and UCV Commander George Gordon gave the principal address. Business conducted during the reunion included a report from the "Historical Committee," in which the group celebrated the fact that their efforts had "greatly influenced the publication of United States histories for schools and private use. The unfairness of much historical writing on the events of the war between the States was exposed and dignified protest made against misrepresentations of the cause of the South." The convention approved a resolution to sponsor a Southern history book to be distributed and taught in schools.

Houston, Texas was chosen as the site of the 1895 reunion.