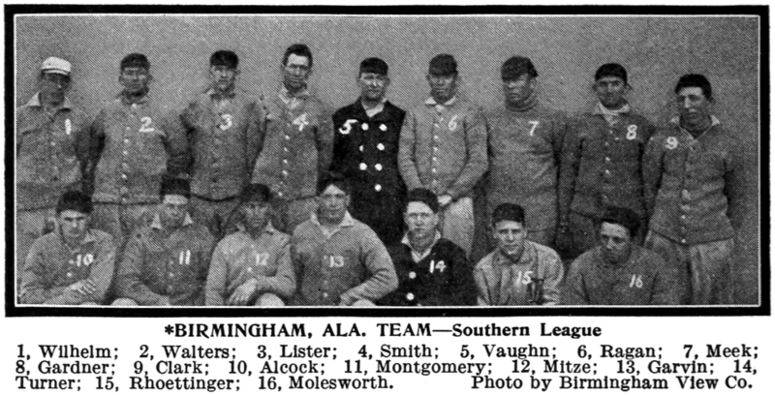 The 1907 Birmingham Base Ball Club (also known as the Birmingham Coal Barons) represented Birmingham in the Southern League during the 1907 season. They entered the year as reigning league champions, but got a poor start and spent most of the season, "wallowed among the tail-enders," before putting together a strong finish. The team finished the season with a 61-71 (.474) record, in fifth place in the league, five games behind Little Rock. The team batting average was a weak .215, despite Herman Meek's .340 average.

The team was owned by William McQueen, with Robert Baugh as club president, was managed by Harry "Farmer" Vaughn, in his fourth year, and played their home games at Slag Pile Field.

On April 19 Vincent Turner shut out Nashville, allowing two hits. A June 1 game was interrupted when two New Orleans players assaulted an umpire and were carried away by police. Four days later, Birmingham clobbered New Orleans pitcher Fritz with 10 runs on 10 hits. Turner got his second shutout on June 16 against New Orleans. After a July 6 home game against Nashville, played in the newly-incorporated town of Elyton, a tally-ho arriving to pick up members of the visiting team forced a lady into a ditch alongside the road. A town marshall attempted to detain the driver, but several of the Nashville players interfered, insisting that they depart immediately. The tally-ho was stopped further along and six of the visiting players were hauled to a provisional court with Elyton mayor Frank W. Smith presiding, held at Baugh's offices. They pleaded guilty and paid a total of $21 in fines.

Through the end of the season, Wilhelm maintained a streak of 59 consecutive innings without allowing a run. He moved up to the Major Leagues with the Brooklyn Superbas in 1908, but returned to the minors in Rochester, New York in 1911, where he was able to extend his minor league scoreless inning streak to 72, which may still stand as an all-time record1..

Catcher Cliff "Tacks" Latimer lost his wife and two daughters in an accident in Cleveland, Ohio on September 7.

In the Southern League spring meetings of 1908, Birmingham owners were fined $150 for having played Wilhelm all season without a contract. He was awarded to the Brooklyn Superbas for the next season.