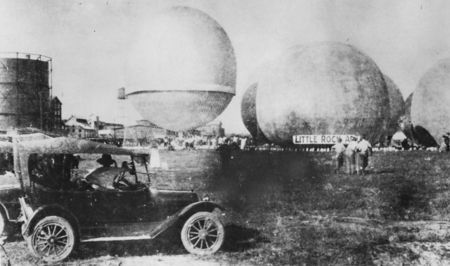 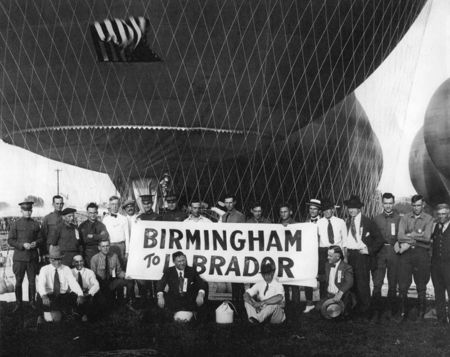 O. V. Hunt photo of participants and sponsors posing before the race start

The 1920 International Balloon Race (held on October 23, 1920) was the ninth in an ongoing series of international balloon races initiated in 1906 by James Gordon Bennett Jr, publisher of the New York Herald. The home country of each year's winning team received the honor of hosting the next event. The country that managed to win three consecutive races would take home the Gordon Bennett Cup.

In 1913, the American team of Ralph Upson and Ralph Preston, flying in the Goodyear, won the trophy after a 618 kilometer, 43 hour, 30 minute flight from Paris. The subsequent races were prevented by World War I and Birmingham was selected as the launching site for the next contest, which took place in 1920. By that time the military usefulness of balloons, once highly esteemed, had been squelched by the dominance of airplanes.

The 1920 race was the first of the international balloon races for which the pilots had the benefit of upper-air as well as surface weather reports. These were supplied to all the pilots by the Weather Bureau's Birmingham office.

Start of the race 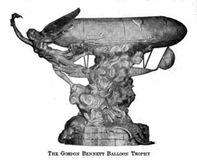 The race featured seven competing balloons. Three from the United States, two from Italy, and one each from France and Belgium. The goal of the race was Labrador, but the winner would be whichever team accomplished the greatest distance along the path from Birmingham to Labrador. Landings at sea did not count. Germany and Austria were not allowed to participate.

The launch was made from the grounds outside the North Birmingham By Products Coke Oven Plant in Tarrant, from which the balloons' gas was supplied. The pilot balloon, Birmingham, was captained by Roy Donaldson with V. O. Hodges of the Birmingham News, Paul Wilson from the Birmingham Age-Herald and Paoli Smith of the Birmingham Chamber of Commerce aboard as witnesses to the event. The balloon itself had been made available to the host city by A. B. Lambert of St Louis, Missouri.

The launch took place under overcast skies on the afternoon of October 23 with more than 50,000 spectators there to witness it (easily outdrawing the Auburn-Vanderbilt game held at the same time at Rickwood Field). Alan R. Hawley, representative of the Aero Club of America, gave the word just before 3:00 PM, "Get set, boys. You leave in five minutes." In fact, it was 4:15 PM before the Birmingham made its first ascent. It was followed by the Lorraine, a French army balloon piloted by monsieurs Nathan and Hirschauer. The American U.S. Army No. 1 balloon was next, piloted by Lieutenant Thompson and Captain Weeks. The largest balloon, the Belgica, further distinguished by its lemon-yellow color, was the fourth to lift away. It was piloted by Lt Ernest DeMuyter with the assistance of Lt Mathieu Labrousse. Historian James Sulzby Jr recounted that the "Italian band" playing for the launch had asked Demuyter to hum the melody of the Belgian national anthem so that they could send them off with it, but the balloon carried him away before he could comply. Harry E. Honeywell, pilot of the Kansas City II (nicknamed the "Uncle Sam") was next to ascend with his assistant. The band was ready for the next entry, the Audens, representing Italy, and sent Major Valle, dressed in full military regalia, off with a rousing rendition of the Italian anthem accompanied by loud cheers from Birmingham's large Italian community. Valle thanked them with a short speech in his native tongue as his balloon carried him over head. The second Italian balloon, Triumphale IV piloted by Major Madore, received the same proud 'arrivederci!'. Ralph Upson's Goodyear II was the last balloon to launch.

Prevailing winds led the competitors in a north-by-northwest direction. As the sun dropped below the layer of clouds it bathed the huge spherical airships in a colorful sunset before they receded from sight. The balloons proceeded up the Mississippi Valley. The pilot balloon, Birmingham, settled into a cornfield near Brownstown, Illinois at a minute before noon on Sunday, the time agreed upon by the race officials. The second night provided an opportunity to the seven official entries when a swifter wind picked up the then-slowest group at high altitude and whisked them eastward back toward the intended course. 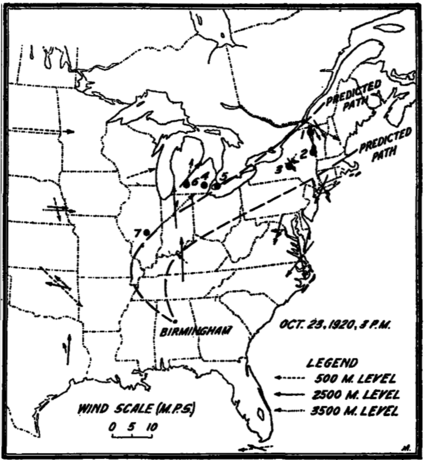 Map of the projected and actual course of the race, showing the landing positions of the 7 competitors, by order of finish, along with prevailing winds

The victorious crew of the Belgica landed at North Hero Island in Lake Champlain (Vermont/Canada) 40 hours and 15 minutes after the launch. Their winning distance was 1,769 km, the third longest in the competition to that time. Most of the balloonists landed eventually, up to 8 hours after Demuyter had recorded his victory, in the vicinity of the Great Lakes. For his part Honeywell set a national endurance record with his 48 hour, 26 minute flight. The Italians took the 3rd and 4th places, with Upson's Goodyear II in 5th, followed by the U.S. Army balloon in 6th and the Lorraine of France falling to last place with an estimated 800 km attained.

The publicity of the race led the Birmingham Aero Club to propose a 1921 National Balloon Race hosted in Birmingham to following May and serving as a centerpiece for the city's Semicentennial celebrations.

DeMuyter and Labrousse were recuperating in a hotel in Burlington, Vermont when they learned of their victory. They were awarded the Gordon-Bennett Cup at a dinner at the clubhouse of the Aero Club of American in New York on November 1. They were also presented with the International Civitan Club mileage cup and a cash prize of $1,000. The crew of the Kansas City II won the second prize of $700. The Italian Auden won the $500 third prize along with the Birmingham Age-Herald's, "Endurance Cup".

DeMuyter was acclaimed as a hero to war-stricken Belgium, and the 1921 International Balloon Race was hosted by Brussels. Demuyter was defeated by a Swiss balloon in that race, but went on to win three straight from 1922-24, thereby claiming the Gordon Bennett Cup for Belgium in the 13th race of the series, at the helm of a new silk balloon bought by funds raised from readers of the Etoile Belge.