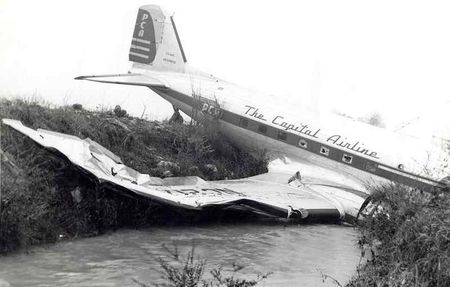 The 1946 PCA Flight 105 crash was a fatal airline accident at Birmingham Municipal Airport which took the lives of three people just before 4:00 PM on January 6, 1946. To date it is the only fatal incident involving a passenger carrier at the airport.

The Douglas DC-3 aircraft was operating as Pennsylvania Central Airlines Flight 105 with seven passengers on board, on the final leg of its regular New York-Pittsburgh-Knoxville-Birmingham flight. Conditions were stormy and the pilot was preparing for an instrument landing on Runway 18.

Investigators from the Civil Aviation Board determined that due to poor visibility the pilot had decided to abort the landing, but reversed his decision after spotting the runway. The craft touched down about two thirds of the way down the runway, and failed to slow down enough to avoid crashing through a barrier fence into Village Creek. Three of the four crew members sustained fatal injuries. The aircraft was damaged beyond repair.

The board placed blame on "the action of the pilot in committing himself to a landing from an approach which was too high and too fast."