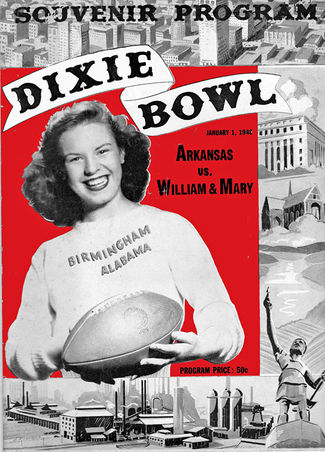 Cover of the game program

The 1948 Dixie Bowl was the first post-season collegiate Dixie Bowl played at Legion Field. The game was sponsored by the Birmingham Parks and Recreation Department and American Legion General Gorgas Post No. 1.

The Arkansas Razorbacks, coached by John Barnhill, came into the game with a 5-4-1 regular season record (1-4-1 in the Southwest Conference). Rube McCray's William & Mary Indians, with their stolid rushing defense, were 9-1 in the Southern Conference and brought a #14 Associated Press ranking into the match-up in front of 21,000.

The game began with a welcome from Mayor Cooper Green and a brief speech on "Liberty and Sports" by American Legion past-commander Ben Ray. Honored guests at the game included Governor of Alabama Jim Folsom, Sr, Virginia Governor William Tuck, and Arkansas Governor Ben Laney. They each gave brief remarks for the start of the radio broadcast of the game at 1:45 PM. The Gorgas Post's Drum and Bugle Corps sounded the colors as the United States flag was raised at 2:00, and the Sylacauga High School marching band performed the National Anthem. Governor Folsom had the honor of "throwing in" the game ball for the kick-off.

The game was broadcast over an 8-state region. A "neutral" broadcast was called by WAPI-AM's Maury Farrell, while each team sent their own play-callers to be heard in their respective home areas.

The Indians scored first by returning a fumbled quick-kick at the Arkansas 6-yard line. Hall of Fame fullback Jack Cloud scored from the one to take a 7-0 lead. He scored again to cap a 78-yard drive early in the 2nd quarter. Quarterback Stan Magdziak failed to convert the extra point, though, making the score 13-0.

Henry Bland caught a Magdziak pass from the 6-yard line for an answering score in the third quarter, but again the Indians failed to convert. Arkansas drove 97 yards on the ensuing kickoff and Leon "Muscles" Campbell scored from 7 yards out to end the scoring, giving the Razorbacks a 21-19 win and their first bowl game victory in three attempts.