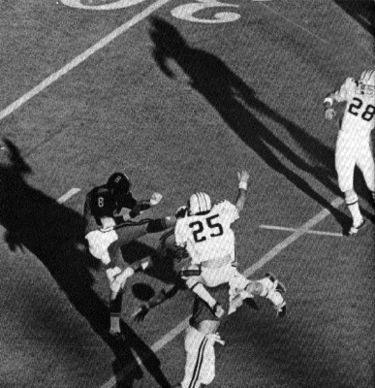 Newton blocking one of Gantt's punts

The 1972 Iron Bowl is also known as Punt Bama Punt. The game was played on December 2, 1972 at Legion Field in Birmingham. The #2-ranked and undefeated (10–0) Alabama team led by head coach Bear Bryant came into the game as a 16-point favorite over the Shug Jordan-coached Tigers, who entered the game with a record of 8–1. For the first three and a half quarters the Tide seemed to have the game well in hand.

Alabama led 16–0 with ten minutes left in the game. With less than 10 minutes remaining, an Auburn drive stalled and managed only a field goal, which made the score 16–3. Reportedly, Jordan's decision resulted in boos from both sides of the crowd: Auburn fans for the appearance of giving up, and Alabama fans because it ruined the point spread. On the ensuing possession Alabama was forced to punt. Auburn's Bill Newton blocked Greg Gantt's punt and his teammate David Langner ran the ball back 25 yards for an Auburn touchdown, narrowing the score to 16–10. Several minutes later, Alabama was forced to punt again and once again Newton blocked it and Langner again recovered and returned it for a touchdown. Gardner Jett kicked the extra point and Auburn won the game 17–16.

The game reportedly so bothered Alabama coach Bear Bryant that he vowed never again to have a 3-step punter. He also made the Auburn game a season long priority in 1973 which resulted in a 35–0 Alabama victory, which spurred an Alabama counter to "Punt Bama Punt" which was "Score Auburn Score".

Gary Sanders was the radio play-by-play announcer for Auburn football in the early 1970s, and his call of the blocked punts, particularly the last one, is familiar to many Auburn fans and has been available on several audio tapes and CD's sold in Auburn University bookstores through the years. The call of the first blocked punt was rather subdued, possibly because Alabama had dominated the game to that point. The call went as follows:

Greg Gantt is in to punt, Johnny Simmons is going back as a single safety, Mitchell and Langner on the...uh...line of scrimmage coming from either side to try to block the kick. Auburn trying to go after it, here's the snap, they got it! Blocked kick! Ball's back to the 25, picked up on the bounce at the 25-yard-line, and in for a touchdown is David Langner!

The call of the second blocked punt is heard more often, and was delivered with much more enthusiasm from Sanders. Additionally, others in the broadcast booth and press box can be heard screaming and yelling over Sanders call. Sanders, possibly due to being caught up in the moment, identified Roger Mitchell as the player who blocked the kick, when Bill Newton (who had blocked the first one) actually blocked it: