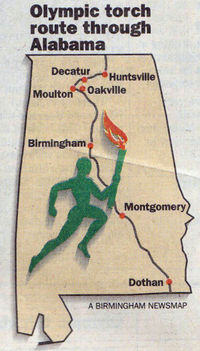 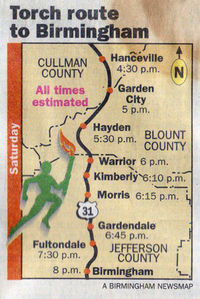 The 1996 Olympic Torch Run passed through the Birmingham area on Saturday, June 29, 1996 on its journey to Atlanta for the 1996 Olympic Summer Games. Highlights of the citywide route included a pass by Birmingham-Southern College that hosted the Olympic Village and Legion Field that hosted eight days of Olympic soccer matches.

The torch entered the State of Alabama on June 28, 1996 and traveled through North Alabama toward a celebration at Huntsville's Space and Rocket Center. The entire journey through Alabama lasted three days and covered 295 miles.

In North Jefferson county the torch route followed U.S. Highway 31 through the cities of Warrior, Kimberly, Morris, Gardendale, and Fultondale as the torch made its way south toward Birmingham.

A celebration and ceremonial cauldron lighting took place on Saturday evening at Linn Park after the torch arrived in downtown Birmingham. A special light display was installed on the Regions Center tower consisting of the Olympic torch and flame, the Olympic rings, and "USA" in red, white and blue. The torch run started again on Sunday morning and made its way along U.S. Highway 31 as it passed through Homewood, Vestavia Hills, Hoover, Pelham, and Alabaster on its way south.

The Olympic Torch Relay Task Force was created to coordinate and facilitate publicity, logistics, and other matters involving the torch relay.

When the torch passed through Birmingham on its way to the 1984 Olympic Games in Los Angeles, torchbearer Tom Williams thought it was a once-in-a-lifetime opportunity to have the honor to carry the torch. Williams was offered a chance to be a torchbearer because he owned Tom Williams Buick and Buick was an official sponsor of the 1984 Olympic Games. Twelve years later, his daughter, Autumn, was one of 150 torchbearers who relayed the torch through the Birmingham area as the torch made its way toward Atlanta for the 1996 Olympic Games. It eventually reached its destination in Atlanta, Georgia after an 84-day, 15,000 mile relay across the United States.