AMC re-enactors raise the flag at the 2012 Rickwood Classic 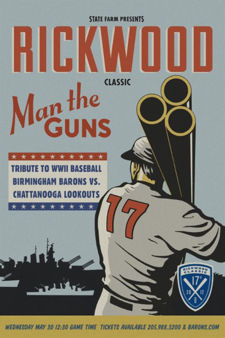 The 2012 Rickwood Classic was the 17th in the annual series of "throwback" games played by the Birmingham Barons in vintage-style uniforms at Birmingham's historic Rickwood Field. The Barons played the Chattanooga Lookouts on the afternoon of May 31. The game was presented by State Farm Insurance. Military supplier DRASH, one of the game's sponsors, provided discounted tickets to active and former military personnel.

The home team Barons wore throwback uniforms modeled after those of the 1942 Birmingham Barons, affiliated with the Cincinnati Reds. The jerseys sported Hale America "Health" patches on the left shoulder. The Lookouts also honored their history with period uniforms. Throwing the opening pitch was 2-time National League MVP Dale Murphy, a former Atlanta Brave and 7-time All-Star. The weather was sunny, with a high of about 94°F during game time. 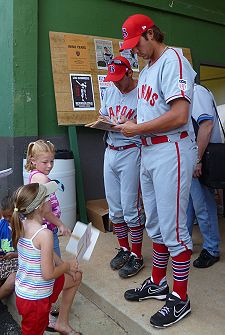 Barons in their throwback uniforms signing autographs before the game

After a scoreless first that stranded two Barons, Birmingham opened the scoring in the bottom of the second when Kenny Williams, Jr drove in Andy Wilkins and Luis Sierra on a line drive single to center field. Jose Castro was caught in a run-down trying to steal second to end the inning at 2-0. Chattanooga wasted no time tying it up with two RBI doubles in the 3rd. In the bottom of the 4th, Williams left Sierra on base when he bunted to third with two outs. In the fifth, Corey Smith hit a long home run to center field, scoring Jose Castro to put the Barons ahead 4-2. In the sixth Chattanooga appeared to have broken the game open when, with 1 out, Nick Buss loaded the bases on a catch error by Andy Wilkins at first. On the next at-bat Wilkins bobbled another catch, but recovered to send it to catcher Luis Sierra who tagged runner Jake Lemmerman on his way to the plate. Sierra then relayed to Corey Smith who tagged Matt Wallach out at third, completing a 2-3-2-5 double play to end the inning.

The Lookouts recovered with three runs before the 7th inning stretch to go ahead 7-4. Birmingham got runners into scoring position in the bottom of the inning, but no runs as Corey Smith struck out swinging. In the 9th, Chattanooga's three batters each grounded out. Williams drove in Seth Loman in the bottom of the 8th to cut the lead to 2, but pinch hitter Jon Gaston grounded into a forced out at 2nd. In the 9th Santos Rodriguez struck out two, giving the crowd of 7,180 hope for a second straight comeback victory. Loman singled to right field to score Tyler Saladino, bringing the Barons within 1, but Jose Martinez struck out, giving the win to Lookouts closer Steve Ames.