The 2020 George Floyd protests were a nationwide campaign of public demonstrations accompanied by scores of riots triggered by the death of George Floyd, a black man in Minneapolis, Minnesota who lost consciousness while pinned under the knee of police officer Derek Chauvin on May 25, 2020.

Floyd had been handcuffed on suspicion of passing a counterfeit $20 bill at a take-out restaurant, but did not cooperate with being forced into the back of a police car. Chauvin arrived as back-up to the arresting officers. He pulled Floyd back out of the car and pinned him face down with his knee on Floyd's neck for nearly nine minutes, during which time he lost consciousness. The incident was recorded by onlookers and police body cameras. Floyd was taken from the scene by ambulance and pronounced dead at the Hennepin County Medical Center. On May 29 the Minnesota Bureau of Criminal Apprehension charged Chauvin with 3rd degree murder and 2nd degree manslaughter in connection with Floyd's death.

Video of Chauvin's use of force was widely shared on social media and mass media. Floyd's death resounded as the latest in a long line of black men killed by police in the United States. That toll had already spawned large nationwide protest actions, many under the banner of Black Lives Matter, a social media hashtag that became a movement following the murder of Trayvon Martin in Sanford, Florida in 2013.

More than 100 demonstrators gathered at Kelly Ingram Park on Thursday May 28 to call for justice for Floyd. Hundreds more demonstrated on Friday May 29.

Larger demonstrations with thousands of participants were held in Birmingham on May 30 and May 31, including one rally at Kelly Ingram Park co-sponsored by the Birmingham Office of Social Justice and Racial Equity and the Birmingham Civil Rights Institute, featuring speeches by Mayor Randall Woodfin and U.S. Senator Doug Jones. During his time on the podium, comedian Jermaine Johnson suggested obliquely that people meet afterward at Linn Park to tear down the Confederate Soldiers & Sailors Monument.

That evening, Johnson was met by a large group of people assembled at Linn Park. He urged the group to take down the monument, but warned that widespread vandalism to trees and buildings would be unwelcome. The 51-foot tall solid stone Confederate monument proved resistant to being toppled, even with a rope pulled by a pickup truck.

May 31 rioting and looting

While most of the attention at Linn Park on the evening of May 31 was given to the Confederate monument, some in the crowd began vandalizing other monuments, The Charles Linn statue was pushed over, the bases of the Spanish American War Memorial and World War I Memorial were defaced, and a fire briefly burned at the feet of the Thomas Jefferson statue. Meanwhile some windows at the Jefferson County Courthouse and the Birmingham Board of Education building were broken.

Journalists covering the growing unrest also experienced violence. ABC 33/40 reporter Stephen Quinn was struck in the head and robbed of his wallet. Alabama Media Group's Madison Underwood was assaulted by a group that beat him and took his phone.

Mayor Randall Woodfin came to the scene and addressed the crowd engaged in vandalizing the Confederate monument. He said that if they would give him 24 hours, he would finish the job they started. Police cleared the park shortly after 10:00 PM, but vandalism continued as groups dispersed through downtown streets breaking windows and lighting fires.

Volunteers began helping to clean up broken glass and other debris overnight, and were joined by Roy Wood Jr who encouraged more people to turn out and publicized the clean-up efforts. Jermaine Johnson contributed financially to some of the businesses that suffered damage. Murals were added to some of the protective barriers expressing solidarity with George Floyd and support for Black Lives Matter.

On June 17, ten individuals were charged with felony 3rd degree burglary related to incidents of looting on the evening of May 31. None of those were for incidents occurring in the immediate vicinity of Linn Park, though two people were charged with looting the ABC Select Spirits at 1116 3rd Avenue North about 10 blocks away. In another incident a group of 20-30 vehicles converged at Academy Sports at the Promenade at Tutwiler Farm in Trussville early June 1 and attacked the front window with bats, and then gunfire. Around eight people entered the store and made for the firearms department, but were unable to steal any guns. One person was formally charged in late June and several other suspects were identified.

The city enforced an emergency curfew to begin at 7:00 PM the following night to help prevent further criminal destruction, and enforced a stricter lock-down of downtown streets. Woodfin stated that, "I 100% support civil disobedience, but that is very different from civil unrest." As promised, the city began dismantling the Confederate monument that evening. Jefferson County and the neighboring suburbs of Alabaster, Bessemer, Gardendale, Homewood, Hoover, Forestdale, Mountain Brook, Pelham, and Tarrant also enacted curfews.

Birmingham expanded its curfew order to prohibit demonstrations on public property, including parks and streets, unless permitted, at all times. On Wednesday Woodfin amended the order to designate W. C. Patton Park in North Avondale for planned and permitted demonstrations or vigils. One group of protesters challenged the curfew at Linn Park that evening. They were ordered to leave and those who did not were taken into custody by police. Two Alabama Media Group reporters present to cover the curfew enforcement, Jonece Starr Dunigan and Howard Koplowitz, were also arrested, but were later released without charges. The ACLU of Alabama criticized the city for going too far in curtailing the constitutionally-protected right of peaceable assembly.

A previously-scheduled rally at Railroad Park on Thursday June 4 was to be allowed to continue, but was eventually canceled as rumors of threatened violence spread through the community. On that day the city erected temporary fencing around Linn Park to deter gatherings while many businesses boarded up windows and closed early. The 10th Judicial Circuit recessed for the afternoon and UAB sent staff and students home at 2:00 PM, "out of an abundance of caution." One telephoned threat did cause Birmingham City Hall and nearby buildings to go into lockdown. The lockdown was lifted when Warrior resident Brian Vest was arrested at home and charged with threatening the lives of Mayor Woodfin and others.

Those actions also served to fuel rumors of violence, often expressed as unconfirmed information that the Ku Klux Klan was planning to demonstrate or carry out bombings. The Mayor’s Office of Public Information circulated a "Statement concerning current misinformation about civil unrest" to address the rumors. About 100 people gathered outside the fence on the south side of Linn Park that afternoon. Some, like Sterling Hutchinson, who spoke to the rally, came because of the KKK rumors to show that they were not afraid. Woodfin reached Hutchinson by phone and asked the group to disperse before police enforced the curfew order at 7:00. Those who did not leave, including writer Michael Harriott, were arrested.

The rally that had been scheduled for Railroad Park was moved to McLendon Park on Saturday June 6. The program included a call for everyone to jog in place for 8 minutes and 46 seconds, chanting "I can’t breathe," to remember George Floyd's final words.

Birmingham's emergency curfew expired at 11:59 on the evening of June 8. On June 17 Birmingham City Attorney Nicole King announced that more than 70 individuals had been arrested for failure to disperse, curfew violations, and disorderly conduct between June 1 and 7. Of those, the city dismissed charges against 27 who were not suspected of being involved in vandalism or violence.

At the suggestion of Cara McClure and Shawn Fitzwater, Birmingham officials undertook the installation of a massive street mural reading "BLACK LIVES MATTER" on the 1600 block of 1st Avenue South, adjacent to Railroad Park. The work was completed by June 19, a day observed as "Juneteenth" to remember the day in 1865 that enslaved people in Galveston, Texas finally learned that they had been emancipated.

A major rally was held that day as part of the "National Million People March for Justice", with hundreds marching from Kelly Ingram Park to the street mural. Activists addressing the rally included Celida Soto, Oni Williams and Karan Vance.

A public rally in support of Black Lives Matter was held in Homewood Central Park on Tuesday afternoon. A notable portion of the rally involved hundreds of participants lying down face down on the ground for the full 8 minutes and 46 seconds that George Floyd was pinned down, hearing his last words spoken. Following the peaceful demonstration, two individuals were detained and questioned by the Federal Bureau of Investigation on Parkridge Drive behind the park. Both were released without charges. 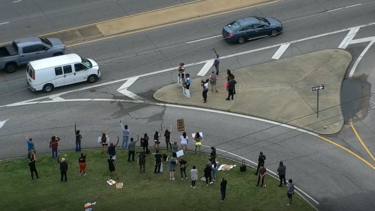 Protests in Hoover frequently referenced the police shooting of E. J. Bradford on November 22, 2018 at the Riverchase Galleria. Early protests outside the Hoover Municipal Complex on May 29–30 escalated as the group moved to occupy U.S. Highway 31. The conflict continued on Sunday afternoon, with several bottles thrown at armored police. The city put a curfew in place at 7:00 PM on Monday. A small group of student protesters who violated the curfew were arrested.

The protests resulted in at least 60 arrests. Windows were broken at Von Maur and Jared at the Riverchase Galleria on Sunday night, but the vandalism was not connected to the demonstrations.

Protests continued in Hoover were led by Satura Dudley, who led chants in a face-off with Hoover Police. On June 8 she called for volunteers willing to face arrest. Eight people who volunteered stepped forward onto the street and were immediately arrested and charged with disorderly conduct. The remaining protesters left the area before the 7:00 PM curfew.

Hoover lifted its curfew on the morning of June 14. Protests continued in Hoover throughout June and July. By July 27 the city claimed to have made 168 arrests, primarily as a response to alleged attempts to block traffic on public streets. Some were also arrested in connection with allegedly throwing objects such as water bottles. Another 35 arrests were made on July 28 as marchers were routed onto the street by barricades.

Attorney Richard Rice was retained by 80 persons arrested and charged with misdemeanors relating to protests in Hoover. Even after a year his attempts to secure evidentiary materials or to get cases dismissed have been largely rebuffed. The city did offer "deferred prosecution" to defendants who paid a $500 enrollment fee, but most have refused. A hearing was scheduled for June 23.

A public rally organized by Alabama Rally Against Injustice in support of Black Lives Matter was held on the grounds of Crestline Elementary School on the afternoon of Friday, June 5.

A public rally organized by Alabama Rally Against Injustice in support of Black Lives Matter was held on the grounds of Vestavia Hills City Hall on the afternoon of Friday, June 5.

In some areas of the county, the most visible effect of the protests and rioting was a run on gun and ammunition sales. There were also several robberies or attempted robberies at gun stores Monday night and Tuesday morning.

In response to the protests, the Birmingham mayor's office undertook a formal review of police conduct policies, specifically with regard to reducing violence and harm carried out by police. Woodfin immediately adopted two proposals, one banning chokeholds and one requiring fellow officers to intervene to stop the use of excessive force and to report any such incidents.