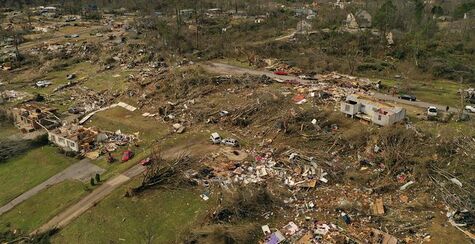 Damage caused by the 2021 Fultondale tornado. Photo by Joe Songer for Al.com

2021 Fultondale tornado occurred on the evening of Monday, January 25, 2021, causing severe damage to areas of northern Fultondale, including at least one death, and significant damage along a 1,500-foot wide path toward Center Point and Clay.

Estimates by the National Weather Service Birmingham suggested that the tornado was an EF-3 on the Enhanced Fujita scale, with winds of up to 150 miles per hour when it touched down just east of I-65 in the vicinity of Walker Chapel Road. From there it tracked northeast toward Fultondale High School. Though the tornado weakened, it continued its path for nearly 10 miles, as far as Old Springville Road near Deerfoot Parkway in Clay.

Locations that reported extensive damage include the Hampton Inn-Fultondale, Hurst Towing, and Black Creek Park, where a large number of trees were felled. The Rusk Mobile Home Park on Pinson Valley Parkway was mostly destroyed, leaving 54 adults and 15 children homeless.

The tornado caused the death of 14-year-old Elliott Arizaga-Hernandez, who was sheltering with his family in the basement of their home when a tree fell onto it. Eighteen others were hospitalized with serious injuries and 11 people were treated on the scene during the night. Many residents whose homes were destroyed were transported to shelter at the Gardendale Civic Center.