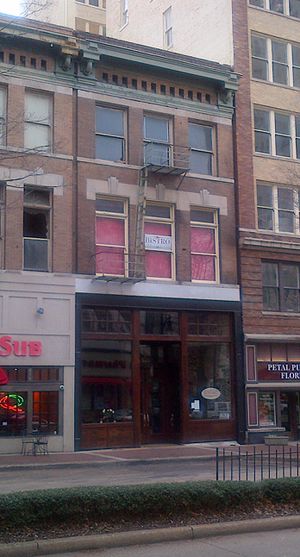 218 20th Street North 3-story, 3-bay red-brick commercial building located between 2nd Avenue North and 3rd Avenue North on the west side of 20th Street North. It was built around 1904 on the site of a former boarding house. It is evident that the design of the building's facade relates to the adjoining 7-bay commercial building at 214-216 20th Street North, and the upper floors of the two buildings were opened to each other in 1920 for Bromberg's Galleries furniture and housewares showrooms. The retailer moved to their own building across the street in 1946.

Harsha Hatti purchased the vacant 218 20th Street North building in November 2002 from developer Joseph McClure. He stripped the interior to its original brick walls, restored the ceilings, and installed a Mahogany storefront. He acquired the adjoining 214-216 building and re-opened the upper floors as offices for his CoreLinQ Innovations in 2015. He further expanded into the Iron Age Building at 212 20th Street North in 2016 as part of the "Iron Age Project" healthcare technology business incubator.

It currently houses Tom Saab's Bistro Two Eighteen restaurant, which has since expanded into the adjoining ground floor space at 216 20th Street North.