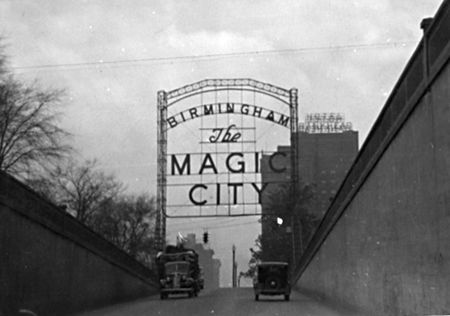 The 5th Avenue North underpass, formerly called the Terminal Tunnel or the Subway Tunnel, is a 661-foot long below-grade section of 5th Avenue North connecting downtown Birmingham with the industrial district east of the Elton B. Stephens Expressway and onto Messer Airport Highway. It begins between 25th Place North and 26th Street North, passes below the site of the former Birmingham Terminal Station and its railroad tracks, and emerges just west of 28th Street North.

The tunnel was completed in 1907, in advance of the completion of the passenger station in 1909. It was used as a transfer point from passenger rail to local streetcars, which emerged into downtown, providing many visitors with their first view of the city. The arrangement led some to refer to the short section of underground streetcar lines as Birmingham's "subway". The Magic City sign was erected over the west end of the tunnel in 1926.

In 1963 the City of Birmingham added a reversible middle lane to facilitate ingress to the city in the morning and egress of commuters in the evenings. As of 2004 the tunnel accommodates approximately 11,000 vehicles per day.