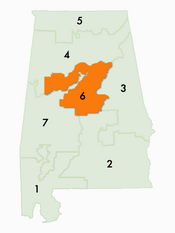 The 6th Congressional District of Alabama is a U.S. congressional district in Alabama, which elects a representative to the United States House of Representatives. The 6th District is currently represented by Gary Palmer, elected in 2014 to fill the seat left vacant by the retirement of eleven-term congressman Spencer Bachus.

The district, which once included nearly all of the Birmingham area has been divided by the creation of the 7th District across the predominantly-African American areas of inner-city Birmingham and Jefferson County in 1992. The demographics of the now mostly-suburban district have made it a Republican Party stronghold while, at the same time, reducing the influence of traditionally Republican white voters in the western part of the state.