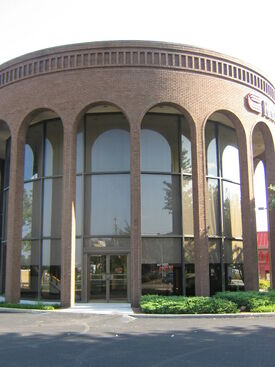 9324 Parkway East (the "round bank" building) was a landmark circular brick arched building on Parkway East in Roebuck.

The land was purchased from Huffman Presbyterian Church by Birmingham Federal Savings & Loan in 1970. The 2,761 square-foot building was similar to Birmingham Federal's modern Vestavia Hills office, but with more traditional styling.

From 1993 until 2009, the building served as a branch of First Commercial Bank. The bank sold the building to Jeff Smith of Insight Properties in 2010. Until 2015 it housed an Easy Title car title loan office.

The building was demolished in 2017 and a new 4-bay retail strip was constructed by the Wiggins Building Corporation on the site.