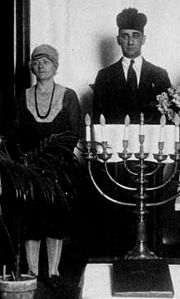 Abraham Bengis and his wife in 1928

Abraham Bengis (born c. 1896 in Vilnius, Lithuania) was rabbi of Temple Beth-El and Knesseth Israel Congregation from 1930 to 1933.

Bengis emigrated to the United States with his father, also a rabbi, in 1908. He graduated from the College of the City of New York and an orthodox seminary of that city. He married and traveled to San Antonio and Fort Worth, Texas Omaha, Nebraska to lead congregations there. In 1929 he served as the first rabbi for Temple Beth-El of Omaha, Nebraska, but left within a year to accept the call of Temple Beth-El in Birmingham.

Bengis, a cultured and scholarly man who was also a fervent Zionist, preached his first Friday evening sermon at Beth-El on the topic of "Palestine and the Jew". He conducted Saturday morning and holiday services in Yiddish and other services in English. He established a Young People's League and a Junior Congregation at the growing synagogue.

While employed by Beth-El, it was arranged that he would conduct services for one Sabbath each month at Knesseth. Bengis was encouraged by the cordial relations between the two congregations, which he considered to be closely aligned in Orthodoxy at the time. Knesseth contributed $1,000 per year to Beth-El to help compensate the rabbi. In 1932 Beth-El's yearbook included full details of the organization and missions of Knesseth, as if they were an arm of the same congregation.

Ill health forced him to resign his active duties in 1933. He was succeeded at Beth-El by the more liberal E. A. Levi and at Knesseth by lay rabbi Isadore Sperling.