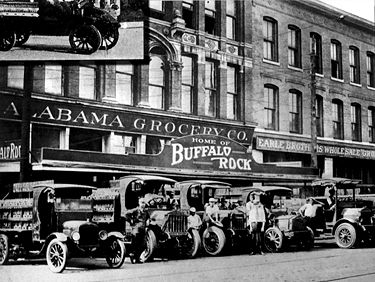 The Alabama Grocery Company was a wholesale grocer operated by Sid Lee from 1901 to 1927. For most of that time, the company's main business was bottling and distributing Buffalo Rock Ginger Ale. Its warehouse and offices occupied 1801-03 1st Avenue North.

Lee had assumed control of the McMillan-Lee Grocery Company from his long-time employer W. C. McMillan in 1892. In 1901 it merged with the Simmons, Durham & Company, to form the Alabama Grocery Company, with Lee remaining as president. The board of directors boasted many of the most prominent names in local business, including Erskine Ramsay, George McCormack, Edward M. Tutwiler, Frederick Johnson, and Henry Badham, Sr.

Many of the company's products were marketed under the "Alabama" brand name.

Meanwhile, Lee was working with Selma chemist Ashby Coleman to create a carbonated soft drink from the popular ginger-based tonic sold by the firm. The golden ginger ale became a hit, and the "Buffalo Rock" name for the drink debuted in 1906. Lee eventually sold off the other aspects of his business to focus on bottling the product and applied for a Trade Mark in 1917. With the company primarily engaged in bottling and distribution of the popular soft drink, Lee changed the name of the firm to the Buffalo Rock Company in 1927.