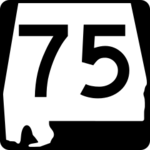 Alabama State Highway 75 or Alabama State Route 75 is a 130-mile route that extends northeastward from Birmingham to the Georgia state line. The route runs west of U.S. Highway 11 and roughly parallels that route as well as Interstate 59. Other Cities and towns along the route include Center Point, Pinson, Oneonta, Albertville, Fyffe, and Rainsville.

The southern terminus of Highway 75 is at the junction with Interstate 59 and U.S. Highway 11 at the intersection of Parkway East, Roebuck Drive, and Gadsden Road in eastern Birmingham. Until the 1990s, Highway 75 overlapped U.S. 11 along 1st Avenue North into downtown Birmingham, continuing to the junction of the two routes with U.S. Highway 78.

After leaving Birmingham and Jefferson County, the route of Highway 75 takes it through rural areas of Blount County, Marshall County and DeKalb County. In 1999, work was completed widening Highway 75 to four lanes into Oneonta. North of Rainsville, Highway 75 leads toward Trenton, Georgia. East of the Georgia state line, the route is numbered Georgia State Highway 301.

For an alphabetical list of locations, see the Alabama State Highway 75 category.

For a more detailed list of locations, see Roebuck Parkway and Parkway East.

For a more detailed list of locations, see Pinson Boulevard and Tapawingo Road.