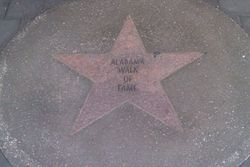 Title star for the Walk of Fame

The Alabama Walk of Fame was created to honor famous Alabamians in a fashion similar to the Hollywood Walk of Fame. The original idea was suggested by Michael Gene Pierce. It is composed of stars of rose-colored marble in the sidewalk located on the south side of 3rd Avenue North, between 18th Street North and 19th Street North. It is no coincidence that this is also the location of the Alabama Theatre, where a star inscribed "Alabama Walk of Fame" sits directly in front.

The induction ceremony for the first group of honorees was held September 9, 1989 at the Alabama Theatre. The event was part of the Alabama Reunion, a two-year promotion created by the Alabama Department of Tourism. It was hosted by Catherine Gee, Elizabeth Fischer, Janet Hall, Gene Lively, and Neilan Tyree and featured entertainment by Alabama Celebration, a song and dance group created especially for the Alabama Reunion. Many of the inductees attended the induction ceremony in person. Not all of the original inductees were born in Alabama, notably John Badham and Truman Capote, but all were raised in Alabama.

Stanleigh Malotte, house organist of the Alabama Theatre from the 1930's to the 1950's, was the first person added to the Walk of Fame since the opening ceremony. It was unveiled during a special tribute at the Alabama Theatre on October 19, 1991. Malotte is the only inductee to be neither born nor raised in Alabama, but was declared a "citizen of Alabama" by a special gubernatorial proclamation.

Since then, James Hatcher and Jake Hess have also been added. "Mr. Gospel Music" is inscribed under Hess' name, the only star to have more than the recipient's name on it.