The Alabama Wildlife Center, located within Oak Mountain State Park, is the state's oldest and largest wildlife rescue and rehabilitation center. It has cared for over 50,000 injured or orphaned animals of 100 different species. It was founded as the Alabama Wildlife Rescue Service by Anne Miller in 1977. She served as Executive Director until her retirement in 2008. The current director is Douglas Adair.

The Alabama Wildlife Center assists Alabama residents with wildlife-related emergencies. The center operates a a telephone hotline for information and recommendations (205-621-3333). The center uses its staff, volunteers and facilities to care for injured, orphaned or abandoned wild animals and to educate the public about threats to wildlife and the details of caring for wild animals. 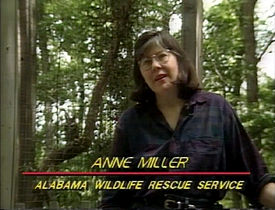 Anne Miller on Discovering Alabama in 1989

Miller started the center while she was a keeper at the Birmingham Zoo. She cared for an injured red-shouldered hawk, sheltering it in her own Smyer Lake cottage and training it to hunt mice. At the time she was affiliated with the Wildlife Rescue Service which operated with grant money out of the Ruffner Mountain Nature Center. By 1981 she was operating the center full time and left the zoo.

In 1987 the wildlife center moved most of its operations to the former Foothills Restaurant in Oak Mountain State Park, an in-kind gift from the state. Renovations were designed by Evan M. Terry Associates architects. In addition to incubators, clinic rooms and enclosures, the center has educational displays, a gift shop, and meeting space for visiting groups. A 750-foot handicapped accessible Treetop Nature Trail begins at the center and permits views of non-releasable birds of prey in large natural habitat enclosures.

The center is operated by a network of hundreds of volunteers. The center is open daily for self-guided tours. Special programs include the "Juvenile Raptor Restoration Project", which helps reduce the need for rehabilitative services by helping adult raptors locate their displaced hatchlings. "Natchez" and "Coosa" are specially-trained "education birds" that accompany educators at programs with youth and civic groups.

In July 2009 the Center reduced programs and staff in the face of reduced contributions. George and other staff members resigned in advance of taking unpaid furloughs and recruitment of volunteers was stepped up. In 2014 the center's outdoor bird enclosures along the Treetop Nature Trail were refurbished with funds from Shelby County and the Alabama Department of Conservation and Natural Resources.