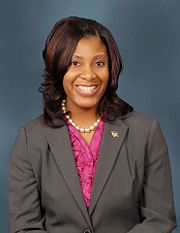 Alana V. Edwards Haynes (born c. 1986) is recruiter and office assistant at UAB and a former representative for Birmingham Board of Education District 7.

Edwards was raised a pastor's daughter, active in church leadership and Sunday School while a teenager. She moved to Birmingham from Columbus, Mississippi to attend UAB and earned a bachelor of arts in communications management and human resources. She is now working on a masters in business administration at Troy University. She was a pre-kindergarten teacher in Tuscaloosa before returning to UAB as a recruiter. She has been active with the NAACP and volunteers with Birmingham City Schools.

Edwards defeated incumbent Odessa Ashley after a run-off in the 2009 election. She was criticized for claiming 10 years' experience in "teaching, youth leadership, promoting education and Christian academics" in her campaign literature.

Edwards married in 2012 and has one daughter. She resigned from the board to spend more time with her family in February 2013. Wardine Alexander was appointed to fill her remaining term on the board.