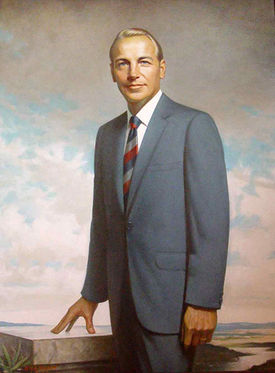 Brewer, the son of a Tennessee Valley Authority employee, was raised in Decatur. He practiced law and, with his wife, Martha Brewer, raised two daughters. He was first elected to the Alabama House of Representatives from Morgan County in 1954 and served three terms. He was made Speaker of the House in 1962. Under his leadership, the house passed a bill that would have amended the Alabama Constitution of 1901 to allow Governor George Wallace to run for re-election. The bill did not pass the Alabama State Senate and Wallace's wife, Lurleen won the Democratic nomination for Governor in 1966. Brewer was nominated for Lieutenant Governor in the same election.

While serving as lieutenant governor, Brewer was sworn in as acting governor for a portion of one day while Lurleen Wallace was out of the state for over twenty days for medical treatment. When this constitutional provision became operative, Mrs Wallace was immediately rushed back into the state to resume her office.

When Mrs Wallace died in office in May 1968, Brewer became governor. He took over direct management of the state and did not solicit input from George Wallace, who was in the midst of his bid for the Presidency as the American Independent Party candidate.

As Governor, Brewer made many progressive reforms in state government. He oversaw the largest increase in public school appropriations in state history, created the Alabama Development Office and Alabama Ethics Commission, and split the Alabama Court of Appeals into civil and criminal divisions.

In 1970, Brewer began to work to be elected as governor in his own right. In this effort, he gained an important ally in President Richard M. Nixon, who won the 1968 presidential election and who sought to neutralize Wallace as a potential adversary in 1972.

Brewer's 1970 gubernatorial campaign, however, was revolutionary in many respects. He refused to engage in racist rhetoric and courted newly-registered black voters. He hoped to build a coalition of blacks, educated middle-class whites, and working class whites from northern Alabama. He unveiled a platform calling for more education funding, an ethics commission and a commission to revise Alabama's 1901 state constitution.

Brewer led Wallace in the Democratic primary but failed to win an outright majority. He then faced Wallace in a runoff. Wallace, running an unapologetically dirty campaign, made slurs about Brewer and his family and made openly-racist appeals to white voters. Wallace narrowly won the Democratic election, and then handily won the general election.

Brewer moved to Birmingham in 1987 to pursue private law practice and to serve on the faculty of Samford University's Cumberland School of Law, where he became Distinguished Professor of Law and Government. He retired in 2007, but still teaches a course on professional responsibility. He has also been an active leader with the Alabama Citizens for Constitutional Reform since 2000.

Albert P. Brewer High School in Eastern Morgan County is named in honor of Brewer. The school opened in 1972. Its patriot mascot is named Preston, after Governor Brewer's middle name. In 2008 Samford dedicated the Alfred P. and Martha F. Brewer Plaza outside the school of law.

Brewer died at UAB Hospital in Birmingham in January 2017.