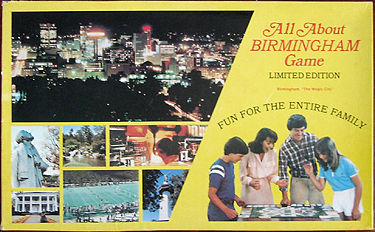 All About Birmingham (also called The Game of Birmingham) was a novelty board game, in the "All About Town" series, published by Windsor Publication in 1982. Players start at "residence square" on the perimeter of the board game and use "All About Town money" to acquire travel cards by reaching particular squares on the board. The first player to acquire 8 cards and return home wins. Players can acquire other players' cards at half the regular price by landing on the same space. The game board, box, cards, currency, rules sheet and player tokens all feature prominent advertisements for local businesses and visitor attractions. 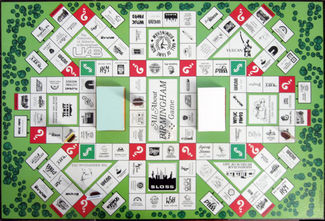 The All About Birmingham game board.