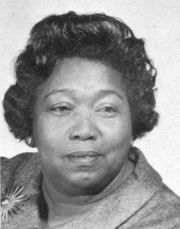 Robertson was the wife of band director Alvin Robertson and the mother of Carole Robertson, one of the four girls killed in 1963 bombing of 16th Street Baptist Church.

Robertson, who had cancer, died in August 2002 after suffering a third stroke. She was survived by her son, Alvin Jr, daughter Dianne Braddock, three grandchildren and six great-grandchildren. She is buried at Greenwood Cemetery.