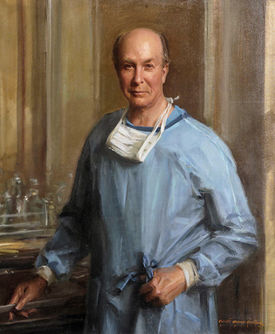 Alston Callahan (born March 16, 1911 in Vicksburg, Mississippi; died October 28, 2005 in Birmingham) was an ophthalmologist and plastic surgeon, and founder of the Eye Foundation Hospital, now known as the "UAB Callahan Eye Hospital" in his honor.

Callahan was inducted into the Alabama Academy of Honor in 1996, the Alabama Healthcare Hall of Fame in 1998, and the Birmingham Gallery of Distinguished Citizens in 2000.

Callahan died in 2005 and is buried at Elmwood Cemetery. His family marker bears an inscription depicting the Callahan Eye Foundation Hospital. His headstone includes insignia noting his polar expeditions.