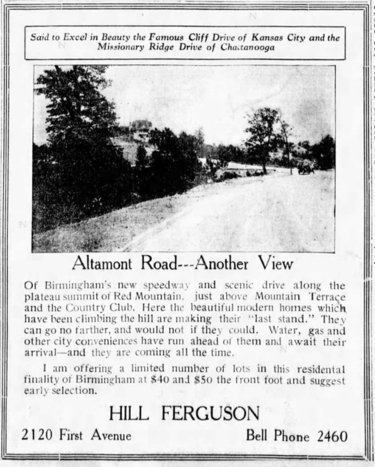 Altamont Road is a 1.4-mile long road on the southern slope of Red Mountain stretching from Pawnee Avenue on the west to meet Cliff Road at the east, and then extending to the entrance to the Altamont School. The road forms the boundary between the Highland Park and Forest Park-South Avondale neighborhoods to the north and the Redmont Park neighborhood to the south. It also forms part of the boundary of the Red Mountain Suburbs Historic District.

The first section of Altamont Road was developed and built by Hill Ferguson in 1908-1909. He then partnered with Robert Jemison Jr to extend it eastward to Cliff Road, providing access to Jemison's Valley View subdivision. The steep slope below the road's eastern end, from Redmont Road to Cliff Road, is dedicated as Altamont Park. The designation primarily protects the view from above the park from encroaching construction.

Another non-contiguous section of Altamont Road to the east is a continuation of Overwood Road above Clairmont Avenue.