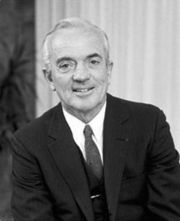 Alvin Ward Vogtle Jr (born October 21, 1918 in Birmingham; died April 10, 1994 in Conyers, Georgia) was a combat pilot and prisoner of war in World War II and later an attorney, and president and CEO of Southern Company.

Vogtle, the son of Alvin and Ollie Stringe Vogtle, earned his bachelor's degree at Auburn University in 1939 and then studied law at the University of Alabama and the University of Virginia. After graduating he applied to work with the firm of Martin, Turner & McWhorter. He was told there were no positions available, so he offered to work for free. When told there were no desks available, he offered to stand. His persistence was rewarded with a position at the firm.

Vogtle had already trained as a civilian pilot when he enlisted in the US Army Air Corps at the outbreak of World War II. Nicknamed "Sammy from Alabammy", he flew a Spitfire on 35 missions until he ran out of fuel and went down under fire over North Africa in January 1943. He was taken prisoner and spent time in several German camps. He made five unsuccessful attempts before making his escape across the Rhine into Switzerland on March 3, 1945. He participated in coordinated escape efforts at Stalag Luft III which inspired fellow POW Paul Brickhill's 1950 novel, "The Great Escape", which was adapted into a 1963 feature film starring Steve McQueen.

After returning home, Vogtle joined the firm of Martin, Turner & McWhorter, which later became known as "Martin, Vogtle, Balch & Bingham". He soon went to work for the firm's main client, the Alabama Power Company, and was promoted through the ranks as head legal counsel and president of the Southern Electric Generating Company before being named vice-president of Alabama Power in 1962.

Vogtle was promoted to vice-president of Southern Company before taking over for Harllee Branch as chief executive in 1969. He retired in 1983 and moved to Reddick, Florida.

The Alvin W. Vogtle Electric Generating Plant near Waynesboro, Georgia is named in his honor. He was awarded an honorary doctor of science by Auburn University in 1982 and served on the Auburn University Foundation and as an executive in residence at the Auburn Business School. He was also a one-time president of the Country Club of Birmingham and captain of the Monday Morning Quarterback Club.

Vogtle died in April 1994 of heart failure. He was survived by his wife, Rachel, seven children, and four grandchildren.