From Bhamwiki
(Redirected from AmSouth Bancorporation)
Jump to: navigation, search

AmSouth Bank (chartered as AmSouth Bancorporation) was a publicly-held company based in Birmingham which merged with Regions Bank in November 2006. AmSouth was previously known as First National Bank of Birmingham.

Although it has since absorbed older banks, AmSouth traces its roots to the first banking office established in the city of Birmingham, Charles Linn's National Bank of Birmingham, founded in 1872, which merged with T. L. Hudgins' City Bank on April 24, 1884 to create the First National Bank of Birmingham. Linn's long-time clerk, William Berney was elected president of the merged bank, with John C. Henley as vice-president. Berney left the following year to start his own Berney National Bank. He was succeeded by attorney William A. Walker, who served ten months, and then made way for William J. Cameron. Cameron remained president through the 1893 depression, which led to the failure of the bank on August 2, 1893.

First National Bank of Birmingham resumed operations on October 9, 1893 with N. E. Barker newly installed as president. Barker was given credit for a significant period of growth. He left in 1902 to accept a job as vice president of the Continental National Bank in Chicago. He was succeeded by W. P. G. Harding, who oversaw the completion of the new 10-story First National Bank Building, which would serve as the bank's new headquarters at the corner of 3rd Avenue North and 20th Street. He resigned in 1914 to accept an appointment to the Federal Reserve Board in Washington, D. C. and was succeeded by Jack Barr, who served only briefly before turning over the reigns to Oscar Wells in 1915. Wells served for 15 years and retired in 1930, turning the presidency over to John Persons.

Persons became the longest-tenured chief executive of First National Bank of Birmingham. He oversaw its operations during the Great Depression, including a merger with American-Traders National Bank. First National was the only bank qualified, under the 1933 Alabama branch banking law, to open branch offices in Jefferson County. The first branches were the formerly-independent banks of Leeds, Woodlawn, North Birmingham, Fairfield, Ensley and Tarrant, which had been bought up by American-Traders before the merger. 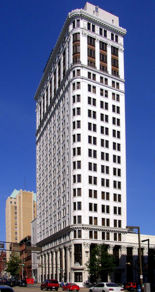 In 1940 First National Bank of Birmingham moved its headquarters to the American Trust Building, across 1st Avenue North from its original location. Over the next two decades branch banks were built in Homewood (1946), West End, Roebuck, and Trussville, and the First National Bank of Bessemer was purchased. The bank's newly-built Bessemer branch opened in May 1956.

A Crestline Village branch opened in February 1965. The AmSouth-Sonat Tower was completed as the bank's new headquarters in 1971.

In 1972, following the passage of the Bank Holding Company Act, the First National Bank of Birmingham Holding Corporation was founded. Over the next decade, the company grew to own more than 20 affiliate banks. The corporation went through several names, including First Birmingham Corporation and Alabama Bancorporation. Dan L. Hendley became president in 1977. In 1979 the bank's operations were relocated to the newly-constructed Newton DeBardeleben Operations Center on 39th Street North. William A. Powell was elected president in 1979 as well.

In 1981 a state law was passed allowing banks to merge across county lines. The affiliated banks of the holding company were reorganized as the combined AmSouth Bancorporation. The company was listed for the first time on the New York Stock Exchange (ASO). In 1983, the former affiliates began banking under the name of AmSouth Bank N.A., which by then had 100 offices statewide. John Woods became chairman and CEO of the bank and its holding company.

In the 1990s AmSouth acquired several more banks in Florida, along with some in Tennessee and Georgia. The largest of these was Fortune Bank of Clearwater, Florida, with $2.7 billion in assets. In 1995 the National Interstate Banking Law went into effect. Dowd Ritter succeeded Woods as CEO in 1996.

AmSouth's size more than doubled in 2000 when it absorbed Nashville-based First American National Bank. With the merger came hundreds of branches across Tennessee along with several in Kentucky, Virginia, and Mississippi. This is cited as a rare example of one bank absorbing another bank larger than itself. As part of the deal, AmSouth also acquired Deposit Guaranty Bank (which was operating as a subsidiary of First American).

On May 25, 2006, AmSouth announced it would merge with Regions Bank, another Birmingham-based bank, in a $10 billion deal. The new entity, and all of its branches, carry the Regions name. The deal was finalized on November 4, 2006. Conversion of bank branches and ATMs to the new signage was completed nationwide in December 2007.