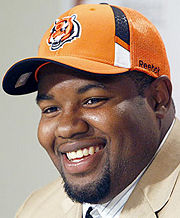 Andre Smith, Jr (born January 25, 1987 in Birmingham) is an American football offensive tackle for the Cincinnati Bengals of the National Football League. He was drafted by the Bengals in the first round of the 2009 NFL Draft. He played college football at Alabama.

Andre Smith is the son of Andre, Sr. and Nesa Smith. His younger brother, Christian Smith, currently plays wide receiver and cornerback at Hampton University. He is also a cousin of Dominic Lee, a former defensive lineman for the Alabama Crimson Tide.

Playing at Huffman High School, Smith was considered by most recruiting analysts as the nation’s top offensive line prospects in the class of 2006 as well as one of the most dominant offensive line prospects in the last decade. He was selected “Mr. Football” by the Alabama Sports Writers Association in 2005 after registering 88 pancake blocks his senior season. He was the first offensive lineman selected in the association’s 23-year history. Smith was also named the Class 6A Lineman of the Year and was one of four finalists for the 2005 Walter Payton Trophy, given to the nation’s best and most dedicated high school football player. He was also a USA Today All-American and participated in the U.S. Army All-American Bowl. He won the Bobby Dodd Award and was a two-time All-State selection.

Smith started each of the first 12 games at left tackle as a true freshman during the 2006 football season. Smith led the Crimson Tide with 62 pancake blocks. He recorded the most pancake blocks in three games with a season-high nine against Duke, eight against Florida International and seven against LSU. He had six games with five or more pancakes. Smith led all Alabama players with 800 snaps. He was one of only six players with over 700 total snaps. He recorded a season high of 80 at Arkansas in his first career road game. He played at least 65 snaps in nine of the 12 games and had four contests with over 70 snaps. He also had one tackle against Mississippi State.

Smith was recognized as a consensus All-American in 2008, as well as the 2008 Outland Trophy winner. He is also considered to be one of the best underclassmen for the 2009 NFL Draft.

On December 29, 2008, Smith was suspended from playing in the 2009 Sugar Bowl, a game Alabama lost to the Utah Utes 31-17. He reportedly was suspended because he dealt with another agent other than his own. A few days later, Smith declared himself eligible for the 2009 NFL Draft, and at the time he was considered a lock to be a Top 5 pick.

At the 2009 NFL Combine, Smith weighed 332 pounds. He decided to leave the combine early in order to prepare for Alabama's Pro Day on March 11, 2009. Smith, however, did not inform his group leader at the combine before he left, and later apologized, stating: "If I had the chance to do it all over, I wouldn't have handled it the way I did. I should have told my group leader that I was leaving, and I didn't. I didn't mean to ruffle any feathers or step on any toes. I didn't mean to grandstand anyone at the combine. That was not my intention at all, and I apologize for my mistake." Smith also admitted that he wasn't prepared or in shape.

His Pro Day performance at Alabama on March 11, 2009 was equally unimpressive, although his weight was down to 325 pounds. It was expected that his poor performances at the Combine and at Pro Day would strongly impact his draft positioning.

Smith was drafted in the first round of the April 25, 2009 NFL Draft by the Cincinnati Bengals, with the sixth pick overall. After negotiations initially stalled, Smith signed a four-year deal on August 30 with the Bengals, including a guaranteed $21 million. The team has an option after the 2010 season that would turn it into a six-year, $42 million deal that includes $29.5 million guaranteed.

Smith injured his left foot during a non-contact drill at training camp and did not play until December of his rookie year. He suffered a broken foot on November 13, 2010 and was placed on injured reserve for the remainder of his second season.