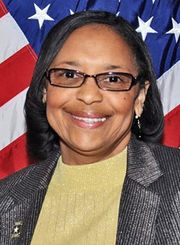 Dawson-August grew up in Philadelphia, Pennsylvania. She attended public schools and earned a degree in finance at LaSalle University. Afterward she worked as a maintenance administrative technician in the Army Reserve. She was recommended by a Colonel in her unit for a management internship with the Southeastern Pennsylvania Transportation Authority (SEPTA) and remained with the organization for 13 years in various positions.

She began her tenure with the BJCTA in January 2013. She coordinated the acquisition of 30 new compressed natural gas-fueled buses in June of that year and began holding public meetings to plan improvements to the system. In May 2014 Birmingham mayor William Bell submitted a 2015 Birmingham budget that reduced funding for BJCTA by $1.8 million. Bell claimed that the city had been over-paying for transit service. Dawson-August disputed the claim and successfully lobbied the Birmingham City Council to maintain the same level of funding.

In January 2015 Dawson-August briefed the BJCTA board on a long list of instances in which board chair Johnnye Lassiter overstepped her authority by interfering in executive matters. After Dawson-August threatened to resign if the situation was not addressed, the board voted to remove Lassiter from her position and appointed Patrick Sellers as chair. In March 2015 Dawson-August was named one of 13 "Women Who Move the Nation" by the Conference of Minority Transportation Officials.

In October 2015, Dawson-August announced that she would not renew her contract with the BJCTA board, which continued through December 31. She submitted her immediate resignation a few days later, saying that she planned to retire and spend more time with her family. She later accepted an appointment as interim director of the Central Midlands RTA in Columbia, South Carolina.

Dawson-August was succeeded by her chief of staff, Barbara Murdock, who served as interim director until taking on the permanent position in August 2016. Murdock was suspended without pay in April 2018. Dawson-August was contracted later that month to serve the BJCTA as a consultant, assisting interim director Christopher Ruffin. That contract was rescinded after another board shake-up on April 25.

Ann Dawson-August is married to Henry August Jr. They have two children and five grandchildren.