Annetta Watts Nunn (born 1958) was the 33rd Chief of the Birmingham Police Department and the first African American woman to hold that title.

Nunn was the third of five daughters born in Ensley to coal-miner Johnnie Watts and his wife, Inez, a retired nurse who worked as a maid. She decided when she was 14 that she wanted to become a police officer. She was motivated by the corruption she observed among police in her neighborhood who took bribes from illegal shot-houses.

Within three years she was promoted to Sergeant. She has served in the Detention, Patrol, Detective Bureau and Administration divisions of the department. She rose to Lieutenant in 1991 and became Captain, overseeing the North Precinct in 1995. She attended and graduated the 11-week course for law enforcement professionals at the FBI Academy in 1997.

In 1999, Mayor Richard Arrington challenged the Police Department to reduce crime by 15%. Captain Nunn's North Precinct was the only one to accomplish the goal that year. She was promoted to Deputy Chief on March 24, 2000, and placed in command of the field operations bureau.

In 2003 she was appointed by Mayor Bernard Kincaid to replace Mike Coppage who had been tapped by Governor Bob Riley to head the State Department of Public Safety. Her term of office began on March 7, 2003.

During her term she was credited with overhauling the system of punishments for police infractions, pushing officers to more closely engage the communities they patrol, establishing a squad that focusses on solving cold cases, and increasing revenue from grants.

Nunn had a relatively quiet tenure, marked by steady crime levels up until 2005 when the murder rate began climbing steeply, despite much smaller gains in other criminal activities. Under her term Birmingham Police suffered their deadliest incident when three officers were gunned down at a house in Ensley in June 2004. Despite the attention paid to the homicide rate, she has enjoyed the full confidence of Mayor Kincaid, even after disagreeing with him over his order to suspend the use of tasers. As the number of homicides continued unabated through the summer of 2006 she faced increasing criticism from the public, who saw her as ineffective.

In October 2007, several days after the 2007 Birmingham mayoral election, Nunn informed Mayor-elect Larry Langford that she would step down from the position of chief. She was publicly offered a one-year contract to remain working as a private contractor to the department to oversee the implementation of a new computerized records system. After seven months Nunn and the Mayor had not been involved in any contract negotiations. Chief of Staff Deborah Vance told Birmingham News reporters that funding talks had been proceeding "behind the scenes". Nunn, however, stated that she did not expect to see a contract and would not accept one if it was offered.

In May 2008 Nunn accepted a position as grant coordinator and advocate for a domestic violence education program at the Birmingham Municipal Court administered by YWCA Central Alabama. 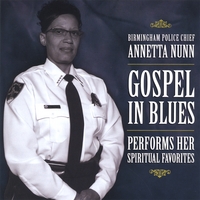 Nunn, a member of the choir at 23rd Street Baptist Church in Ensley, is an outspoken Christian who has identified the underlying cause of violent crime as a turning away from God's plan. She sought help from ministers and churches in providing programs to reduce criminal behavior, but did not withhold criticism when some ministers fanned flames of racism after the shooting of a suspect by police. In November 2006 she recorded the gospel song "Precious Lord" for an anti-violence conference. She sang it live for the 2006 Street Soldiers National Conference that same month, and the track earned airplay on WAGG AM 610. Positive reception from that recording led to the full album Gospel in Blues, released in 2007. Sales of the CD, produced by Henry Panion, benefit the YWCA Central Alabama's domestic violence program.

In 2005 she divorced her husband Robert Nunn, Sr, with whom she has two sons, Robert, Jr and Stephen. She has one granddaughter.