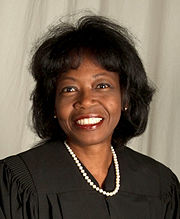 Annetta H. Verin (born May 10, 1954 in Tuscaloosa) is a judge in the Jefferson County Circuit Court, and a former attorney and municipal judge for the City of Bessemer.

Verin, a graduate of Druid High School, earned her bachelor's degree in business administration at Howard University in Washington D. C. in 1976 and graduated from the Howard University School of Law with a Juris Doctorate in 1981. She joined the staff of the Legal Services Corporation in Tuscaloosa, representing indigent clients, in 1982. Since then she has served as a staff lawyer for the City of Birmingham (1984–90 and 1995–97) and as a prosecutor in the office of the Jefferson County District Attorney (1990–93). She was appointed by Jim Folsom Jr to fill a vacancy on the Circuit Court from 1993 to 1995, but did not win election to the full term in 1994. She was president of the Magic City Bar Association in 2009.

Verin defeated incumbent Dan King III in the 2010 Democratic primary. King had been suspended from the bench after complaints of ethics violations. Verin then edged out Republican Virginia Meigs in the general election to earn her spot on the bench. She was unopposed in the 2016 general election.

Scott Roebuck was appointed to take her place in the Bessemer Municipal Court. She is married to fellow judge Eugene Verin and has two sons, Ray and David. She is a member of Faith Chapel Christian Center.