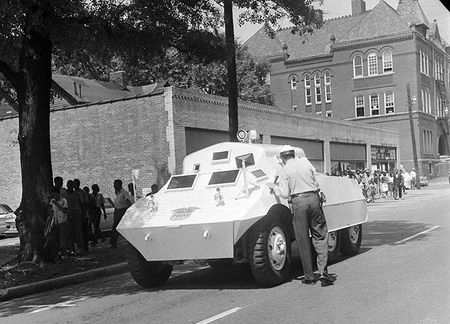 The armored riot car was one of two rubber-tired armored personnel carriers purchased for use by the Birmingham Police Department by direction of then Commissioner of Public Safety Bull Connor.

The riot cars were used for intimidation, with Connor himself often riding along on patrols through black neighborhoods. They were also dispatched to scenes of protest during the Civil Rights Movement.

The two vehicles had been dumped at the New Georgia Landfill before the city donated them to the Birmingham Civil Rights Institute. The vehicles were moved in October 2008. One of them, restored and repainted, was cut cleanly in half and installed as part of the institute's newly-renovated galleries, set to open in January 2009.