The Birmingham Bowl (officially branded the PapaJohns.com Bowl from 2006 to 2010, the BBVA Compass Bowl from 2011 to 2014, and the Jared Birmingham Bowl in 2018) is a post-season college football bowl game approved by the NCAA in 2006. The game is played at Legion Field, and matches an American Athletic Conference team against a representative of the Southeastern Conference.

For its first two years, the bowl matched a team from the Big East or Mid-American Conference with a team from Conference USA. With the NCAA's approval of the bowl's affiliation with the SEC, the league gained a ninth automatic bowl slot for its 12 (now 14) member institutions. The Big East reorganized as the American Athletic Conference in 2013.

The game is owned and organized by ESPN Regional TV. ESPN named Mark Meadows as executive director, Bo Kerr as manager of sales and marketing and Robbie Robertson as chairman of the executive board for the bowl committee. In September the bowl committee made a $25,000 donation to the Monday Morning Quarterback Club's fundraising efforts on behalf of the Crippled Children's Foundation. PapaJohns.com was announced as title sponsor on November 16, 2006. The company renewed its sponsorship contract in 2008, agreeing to keep its name on the 2008 and 2009 bowl games.

The 2013 contest between Ole Miss and Pitt set the attendance record at 59,135. The bowl's agreement with the Southeastern Conference was renewed in 2019 for the 2020 through 2025 games. The 2020 college football season, played in the midst of the 2020 Coronavirus pandemic, did not produce enough bowl teams to play the Birmingham Bowl.

The 14th Birmingham Bowl was the first with TicketSmarter as title sponsor. The game was played on Thursday, January 2, 2020 at Legion Field and broadcast live on ESPN.

The 6-6 Boston College Eagles of the Atlantic Coast Conference met the 10-3 Cincinnati Bearcats of the American Athletic Conference.

The 13th Birmingham Bowl, the with Jared jewelers as title sponsor on a one-year contract, was played on Saturday, December 22, 2018 with the 8-5 Memphis Tigers, west division champions of the American Athletic Conference, facing the 6-6 Wake Forest Demon Deacons from the Atlantic Coast Conference.

The 12th Birmingham Bowl was played on Saturday, December 23, 2017 before a crowd of 28,623. The returning champion 10-2 South Florida Bulls of the American Athletic Conference came from behind to beat the 6-7 Texas Tech Red Raiders of the Big 12 Conference 38 to 34.

The 11th Birmingham Bowl was played on Thursday, December 29, 2016 with the favored 10-2 South Florida Bulls of the American Athletic Conference defeating the 6-6 South Carolina Gamecocks of the Southeastern Conference 46 to 39 in overtime.

The 10th Birmingham Bowl was played Wednesday, December 30, 2015 at 11:00 AM with the 6-6 Auburn Tigers of the Southeastern Conference beating the 9-3 Memphis Tigers of the American Athletic Conference by a score of 31-10.

The 9th Birmingham Bowl was played Saturday, January 3, 2015 with the Florida Gators (7-5) of the Southeastern Conference defeating the East Carolina Pirates of the American Athletic Conference, 28-20. The announced crowd, on a cool, rainy Saturday, was 30,083. A group of Free UAB protesters attended the game to publicize their cause. 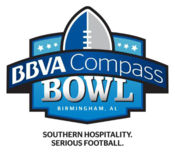 The 8th Birmingham Bowl was played Saturday, January 4, 2014 with the Vanderbilt Commodores (8-4) of the Southeastern Conference defeating the Houston Cougars (8-4) of the American Conference by a 41-24 margin in front of a crowd of 42,717.

The 7th BBVA Compass Bowl was played on Saturday, January 5, 2013. The University of Mississippi Rebels (6-6) defeated the Pitt Panthers (6-6), who made their third consecutive trip to Birmingham. Heisman Trophy winner Danny Wuerffel spoke at the bowl luncheon and former player Rich Wingo addressed the FCA breakfast crowd. The Rebels, in their first year under head coach Hugh Freeze, defeated the Panthers 38-17 before a record crowd of 59,135. Rebels quarterback Bo Wallace was game MVP.

The 5th game (the first to be called the BBVA Compass Bowl) was played on Saturday, January 8, 2011 with the Pitt Panthers (8-5) of the Big East defeating the Kentucky Wildcats (6-7) of the Southeastern Conference by a score of 27-10. The announced attendance was 41,207.

The 4th PapaJohns.com Bowl was held for Saturday, January 2, 2010 with the 7-5 Connecticut Huskies of the Big East Conference defeating the 7-5 South Carolina Gamecocks of the SEC 20- 7. The official attendance was 45,254.

A pre-game pep rally and street festival was held at Five Points South with music by the Martini Shakers and Just a Few Cats featuring Ruben Studdard. Mayor Larry Langford had the 5 Points circle painted red for the occasion.

Rutgers came from behind to defeat the Wolfpack 29-23. Quarterback Mike Teel led the Scarlet Knights with 319 passing yards, including 2 touchdowns. Teel was named the game's MVP, and Rutgers finished the season 8-5. North Carolina State fell to 6-7. Attendance for the game was 36,387.

In preparation for the second PapaJohns.com Bowl, a parade and street festival, sponsored by merchants, ESPN, and Operation New Birmingham, were held in Five Points South Friday afternoon and evening. The parade marched from Powell Avenue to Five Points up 20th Street South. Other entertainment included live bands at 11th Avenue South and 20th Street and a kids' zone. A pre-game party was held at Legion Field on Saturday morning, attracting roughly 2,000 people.

The game was played at noon on Saturday December 22, 2007 before a crowd of 32,595. The University of Cincinnati defeated Southern Miss by a score of 31-21. Early in the second half the Golden Eagles' punter Britt Barefoot failed to convert a fake punt on 4th and 1. Bearcats receiver Earnest Jackson scored a 29-yard touchdown from a Ben Mauk pass on the next play after the turnover to go ahead 21-7. Southern Miss, which had 205 all-purpose yards from rusher Damion Fletcher, failed to secure an onside kick with 9:37 left, giving Cincinnati a chance to control the clock. 52 of the Bearcats' 78 plays from scrimmage were pass plays. Mauk finished the day 30 for 52 for 334 yards, four touchdowns and three interceptions and was named the game's most valuable player.

The game was Jeff Bower's last as coach of the USM Golden Eagles. His overall record at Legion Field is 6-6 with 5 wins over UAB, and 1 over the Alabama Crimson Tide. His first game as head coach at Southern Miss was the 1990 All-American Bowl in which his Brett Favre-led Golden Eagles fell to North Carolina State 31-27.

Provisional logo used in early marketing for the inaugural 2006 game

The bowl paid $300,000 to each affiliated conference. Tickets were $30 (or $20 each when buying 4 or more). Early purchasers will be able to renew the same seats for future games. In all, around 41,000 tickets were sold, and the attendance was reported as 28,527. Jim Smither of the Greater Birmingham Convention and Visitors Bureau estimated 6,000 out of town visitors and a $4.1 million economic impact for the event.

Players from the opposing teams made visits to the Birmingham Civil Rights Institute and 16th Street Baptist Church, enjoyed a night of bowling at Vestavia Bowl and a show at the Comedy Club Stardome in Hoover. Team captains, mascots and cheerleaders visited Children's Hospital while the coaches' families made trips to the McWane Science Center and the Renaissance Ross Bridge Resort & Spa. The Friday team luncheon at the Sheraton Birmingham featured keynote speaker Archie Manning and the presentation of the Legend of Birmingham Award to new Samford head coach Pat Sullivan.

14 people were arrested for disorderly conduct by Birmingham Police at Dave's Pub in Five Points South the night before the game. According to Sergeant Joel Brown most of those arrested were visiting from North Carolina.