1917 Bank of Ensley building as it appeared in a 1929 advertisement for the Georgia Marble Co. 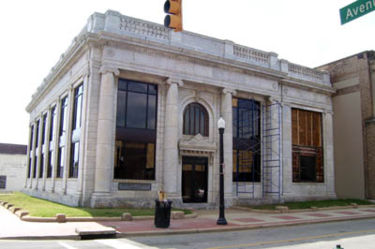 The Bank of Ensley was a bank founded by Erskine Ramsay and George McCormack with Robert Chadwick on May 10, 1899. It opened for business in 1900. The bank's slogan was "Strong enough to protect you. Large enough to serve you. Small enough to know you."

In 1906 the Bank of Ensley merged with the First National Bank of Ensley. The president of that company, Gordon Dubose, was arrested later that year on a charge of embezzling $40,000 of his bank's money prior to the merger.

In 1917 the bank constructed a new monumental Beaux-Arts style building, clad in Georgia marble, at 19th Street and Avenue E in downtown Ensley.

In 1920 and 1921 co-founder Erskine Ramsay established savings accounts at the Bank of Ensley with $100 for several boys who had been named "Erskine" in his honor. The publicity caused him irritation as he continued receiving letters, some dishonest, asking for money after the birth of another Erskine.

In 1929 the bank moved across the same intersection to the ground floor of the new 10-story Ramsay-McCormack building. The effects of the Great Depression, however, forced the bank to close its doors on January 11, 1930. The savings accounts for Erskine Ramsey's namesakes were lost.

A branch office, managed by H. J. Cummings, was located in Wylam. A bench outside the building served as a gathering spot for retired miners to swap stories and pass the time.

The building was later used by the First National Bank of Birmingham. Later it was used for storage by the Birmingham Public Library while the Ensley Library and East Ensley Library underwent renovations.

The building is currently the home of the Monumental Contracting Services, which performed a restoration.

The Bank of Ensley building was added to the National Register of Historic Places on June 21, 1984.