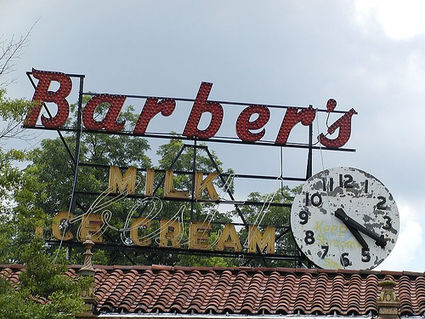 The Barber's clock was a large illuminated clock and sign formerly atop the Shepherd-Sloss building at the corner of Highland Avenue and 20th Street South in historic Five Points South.

The building's design provided for a rooftop sign from the beginning. As soon as the building was completed in 1928, Buffalo Rock erected an electric sign advertising their ginger ale with the slogan "Keep Healthy, Drink Buffalo Rock" alongside an animated bottle that poured a stream of amber lights into an illuminated glass. This sign replaced Buffalo Rock's monumental four-story Buffalo Rock sign at their former 26th Street North headquarters.

Sometime in the mid-1950's the Buffalo Rock slogan was removed and a new advertisement for Barber's Dairy was attached to the same framework. The sign featured the Barber's logo illuminated with a multitude of light bulbs on a red background. Beneath this were the words milk and ice cream in yellow block letters with the word best flashing in white neon. On the bottom right was a clock face. At some point between 1999 and 2003 the clock stopped working and indicated that it was always 4:20, providing amusement for marijuana enthusiasts.

Barber Companies, which sold Barber Dairies to Dean Foods in 1997, removed the iconic sign in August 2004 in order to make repairs to the roof of the building, which then housed Bell Bottoms dance club. Don Erwin, speaking on behalf of the company, expressed doubt as to whether it would be put back up since it was in poor physical condition, unlikely to meet electrical code, and was anchored into the roof structure in a manner that was no longer accessible after the repairs.

Almost immediately after its removal a grassroots organization, led by Tom Cosby, formed to support returning the clock to its former location. The clock and signage remain in storage pending further action. When Barber began renovating the Shepherd-Sloss building in early 2016, some wondered whether the sign might be replaced, but the only indications from the company downplayed any possibility.