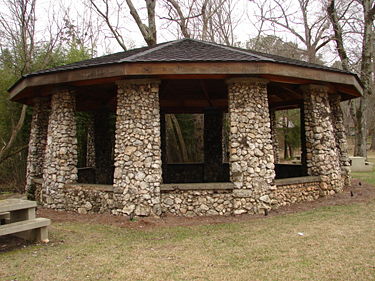 Barber Springs is an aquifer spring located on Polly Reed Road in Center Point, at the headwaters of Five Mile Creek. It sits in Jones Valley, between Red Mountain and Sand Mountain, in an area marked by sandstone outcroppings and lakes and ponds in the low-lying areas.

The area was originally settled by Robert Reed in 1816 and the springs have been in use ever since.

In 1871, Dave Franklin dug a well at the springs and built a homestead, and later a grocery at a convergence of roads near the springs. By the early 1900s a blacksmith shop and post office had rounded out the community, now commonly called "Center Point" or "Centerpoint" for its location at the gathering of roads.

In the early 20th century, Arlie Barber built a pavilion around the springs to protect them. The rock structure still stands, though the roof has only recently been replaced by Center Point. Barber ran a seed company next to the springs, and the springs are now named after him.

When Center Point incorporated in 2002, the leaders chose Barber Springs as the city's logo. It adorns the sides of city vehicles, letterhead, and their website. The springs, buildings (including the Reed residence and Harvey's Florist) and adjoining 2.8 acres of land were purchased for $200,000 by the city on March 24, 2004.

In 2009, Barber Springs was opened to the public as part of Center Point's new Reed-Harvey Park, which includes a senior center and recreation areas. City officials have discussed bottling the spring water to generate publicity and revenues. Their initial testing indicated that the water is suitably pure.