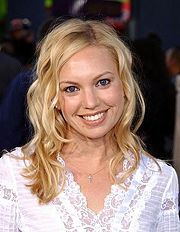 Barret Swatek (born March 3, 1977) is an actress, best known for her work in the television series 7th Heaven.

Swatek, the daughter of Bill and Lana Swatek of Birmingham, was a competitive figure skater as a child before switching to singing and acting at the age of 12. She attended the University of Arizona and Loyola Marymount University, where she graduated with a film degree.

Her first major role was a major part in the 2001 mockumentary On Edge with Jason Alexander and Wendie Malick in which she got to showcase her ice-skating skills. In 2000 she began appearing in the recurring role of "Cheryl" in 7th Heaven.

Her brother, Dax, is a Republican strategist.