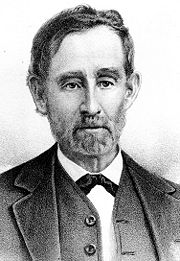 Grace, the grandson of Revolutionary War casualty Joseph Grace, came to Alabama with his parents, James and Mary Acker Grace. James, a veteran of the Andrew Jackson's Creek War died soon after they settled near Jonesboro. Young Grace, who had attended only one year of formal schooling under Thomas Carroll, was hired as an assistant to Harrison Goyne, circuit clerk at Elyton in 1827. Grace succeeded his former employer as clerk in the next election. He was re-elected in 1835 and 1839, but resigned the office to build a homestead in the countryside at Grace's Gap, where the Louisville & Nashville Railroad now crosses Red Mountain.

Grace was elected Sheriff in 1844 and held the office for the constitutionally-limited single term. He was appointed to perform the first assessment of property in Jefferson County by Judge Forrest, and continued in the role of tax assessor from 1859 to 1863. That year he opened the first ore mine on Red Mountain, the Eureka Mine, to supply John T. Milner's Oxmoor Furnace. He also hosted prospector Thomas Peters and shared his vision for a great industrial enterprise in the District. Grace ended his career as an agent of the Pioneer Mining and Manufacturing Company, assembling the properties which were developed as the Thomas Furnaces.

Grace was known as an expert rifleman, poet and flutist. He had a small library of poetry as well as the works of Sir Walter Scott. He edited the Central Alabamian, successor publication to the Jones Valley Times. Grace married the former Jane Mitchell and had three children by her. The oldest, Francis Mitchell, became a Methodist minister. The second died in an accident at the University of Georgia. Grace's youngest son, Baylis, Jr became an attorney in Birmingham.

Grace died in 1894 and is buried at Forest Hill Cemetery. His homestead was sold to iron master Samuel Thomas. Grace's grave was unmarked until a granite monument was erected by his granddaughter, Janie Grace Robinson, in 1995.