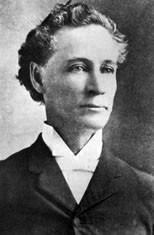 Riley was born the son of Enoch George Riley and his wife Sophronia Autrey on a farm in Pineville in Monroe County. After sporadic schooling at home he made his way to Starlington, South Carolina and took a job as a primary school teacher, earning money to attend Erskine College, where he graduated in 1871. He was ordained as a Baptist minister in Pineville in 1872.

The next year, Riley went back to South Carolina to enrol at the Southern Baptist Theological Seminary in Greenville, but his health declined and he returned to Alabama after his first year. After regaining his health he travelled to Pennsylvania to attend the Crozer Theological Seminary, completing his studies in 1876 to take up the call to ministry. On June 21 of that first year as a full-time pastor, Riley married the former Emma Shaw of Belleville, with whom he eventually fathered eight children.

Riley pastored at churches in Carlowville and Snow Hill and spent a year leading a church in Albany, Georgia before returning to Alabama to preach in Opelika from 1879 to 1882. He also served as editor of the Alabama Baptist newspaper and authored several books on the history of the state.

Riley took over the presidency of Howard (now Samford University) from James T. Murfee in 1888, just after its controversial move from Marion to a new campus in the East Lake section of Birmingham near Ruhama Baptist Church. He accepted the position after three earlier nominees withdrew their names and went to work immediately to shepherd the college through a deep financial crisis. The trustees considered abandoning the relocation to Birmingham, but never pulled the plug.

Riley oversaw the refurbishing of the old Ruhama Academy building that was donated to Howard and initiated the construction of the brick edifice that would become known as Old Main. He also directed the purchase of cattle and the planting of gardens to help supply the dining hall. He petitioned the board of trustees to allow the construction of tenant houses on campus, to be operated by Baptist women for profit and help increase the nearby population, the value of the campus property, and the goodwill of state Baptists. This plan was never carried out.

Riley had to work tirelessly and traveled at his own expense to recruit students, secure promised assistance from the city and squeeze donations from the Birmingham community. An 1893 fundraising campaign netted only $500 of $2000 needed to sustain the operation of the campus. The record number of students enrolled that year required deferred tuition to be able to attend and Riley had to ask the trustees to borrow to keep classes in session.

He resigned in 1893 to accept a job as professor of English literature at the University of Georgia and was succeeded by Arthur McGaha.

Riley remained at Athens until 1900 and then accepted the pastorship of First Baptist Church in Houston, Texas. While in Texas he served as a superintendent of the Anti-Saloon League, which was headquartered in Dallas. It was there that he met Booker T. Washington in 1906 and solicited his advice on his volume on race, The White Man's Burden, which has since been criticized for its paternalistic slant. Riley was admired by Washington and gave two speeches at Tuskegee Institute at his invitation. He also spoke on behalf of the Institute at a function in New York. Riley later wrote a biography of his fellow educator.

He spent his last years in Birmingham where he continued to write, preach, and act as a civic leader.