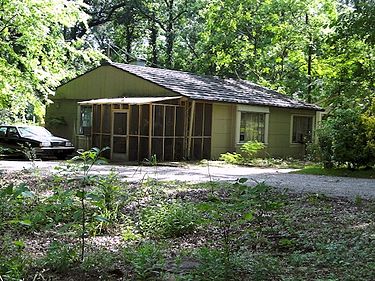 The Bernice Wright residence is an enameled all-steel prefabricated house constructed in 1949 for Bernice Wright at 2424 Cahaba Road in Mountain Brook. The 2-bedroom "Westchester" model house ordered by Wright from Realty Investment of Birmingham was manufactured by the Lustron Corporation in Columbus, Ohio.

The 1,085-square-foot rectangular gabled house used approximately 3,000 pre-fabricated components which were shipped to the building site on a single specially-modified truck for assembly. The house was designed with a large living room, entered from the recessed porch and open to a dining space and kitchen. A utility room was screened off from the kitchen by a partial wall. Two bedrooms and a bath on the back of the house were accessed from a small vestibule off the living room.

The house was later owned by Harvey Moore. Later they were purchased by developer Margi Ingram as rental properties.

The original 2-foot square enameled steel exterior panels, in "desert tan" remain on the house. As one of just 11 Lustron houses remaining extant in Alabama, the building was added to the National Register of Historic Places on February 24, 2000.

In 2015 Ingram announced plans to demolished the Wright and adjoining John Gleissner Lustron house for construction of the Manning Condos.