This article is about the Blues singer. For the restaurateur, see Bessie Smith (Southside Grill). 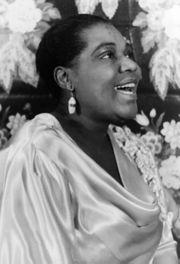 Bessie Smith (born April 15, 1894 in Chattanooga, Tennessee; died September 26, 1937 in Clarksdale, Mississippi) was a pioneering and influential vocalist, and the most popular female blues singer of the 1920s and 1930s.

Smith was the daughter of William and Laura Owens Smith. Her father worked as a laborer and part-time Baptist preacher from Moulton, Lawrence County. He died when Bessie was a young child. Her mother died in the early 1900s, as well, and Bessie and her younger siblings remained in the care of an older sister, Viola. Accompanied by her brother Andrew on guitar, Bessie sang and danced outside the White Elephant Saloon, busking for change. An older brother, Clarence, went out on tour with Moses Stokes' theatrical troupe as early as 1904. Bessie auditioned for the troupe in 1912 and was hired on as a dancer behind star singer Ma Rainey.

Smith quickly graduated from the Stokes' company and performed in various chorus lines and as a duo act with Wayne Burton, while also launching her solo act, often performing at the 91 Theater on Decatur Street in Atlanta, Georgia. She was also a major draw in Birmingham, performing for huge crowds at the New Queen Theater in 1916. By 1920 Smith had made a name for herself on the black-owned Theater Owners Booking Association circuit. When not touring, Smith often returned to Birmingham and worked as a laundress.

Frank Walker signed her to a contract with Columbia Records in early 1923, and she moved to Philadelphia for sessions that began in February. Her first single, "Downhearted Blues" was a hit, and she became the TOBA circuit's biggest draw, headlining shows and traveling in a private rail car as the highest-paid African American entertainer in the country. Columbia promoted her as the "Queen of the Blues", a title that was elevated by the press to "Empress of the Blues". The introduction of electrical recording technology gave her powerful contralto range a previously-unheard presence just as radio was spreading blues music across the country to white and black audiences. Among her records were covers of songs written by Birmingham's Coot Grant. She eventually made 160 records for Columbia, establishing an influential body of work. Throughout her career she performed to acclaim in Birmingham, including shows at the Palace Theater in Ensley and the Frolic Theater in Birmingham in December 1926.

During the Great Depression the recording industry suffered greatly and motion pictures largely supplanted touring Vaudeville shows in theaters across the country. Smith's celebrity allowed her to continue performing in nightclubs and on solo tours, and won her a role in the short-lived Broadway musical "Pansy". She appeared on film in the two-real short "St Louis Blues", singing W. C. Handy's hit song accompanied by Fletcher Henderson's orchestra, the Hall Johnson Choir, pianist James P. Johnson, and a string section. She made her last recordings, for Columbia's Okeh label, in November 1933, showcasing a swing-influenced sound that would be picked up within days by newcomer Billie Holliday in the same studio.

While making her first records in Philadelphia, Smith met security guard Jack Gee and married him on June 7, 1923. The union was marked by infidelity on both sides, with Bessie involved in affairs with both men and women. The couple split in 1929 and Smith later took up with a long-time friend, Richard Morgan (uncle of Lionel Hampton). The couple was involved in an automobile collision on U.S. Route 61 between Memphis, Tennessee and Clarksdale, Mississippi on September 26, 1937. Smith died from her injuries at the Thomas Afro-American Hospital in Clarksdale. A funeral service was held in Philadelphia a week later with more than 7,000 people in attendance. Thousands more filed by her coffin, which was placed on view at the O. V. Catto Elks Lodge. She was buried at the Mount Lawn Cemetery in Sharon Hill, Pennsylvania. Her grave remained unmarked until 1970. The headstone was paid for by Janis Joplin and one of Smith's former servants Juanita Green.