Betty Jane Baker (born Betty Jane Rase on May 6, 1927 in Birmingham; died April 2, 2002 in Rancho Mirage, California) was Miss Birmingham in 1944, and had a long career as a singer, songwriter and performer.

Betty Jane was raised by engineer Ernest Rase and his wife, Lena in a house at 708 9th Court West. She was a cousin of opera singer John Charles Thomas. A musical prodigy, she began playing piano at three and was also recognized as a talented singer. By the time she was a senior at Phillips High School she was already a veteran big band singer who starred in her own radio program, using the stage name of Betty Jane Phillips.

Betty Jane entered the Miss Birmingham pageant in 1944 under her birth name. She won the crown, which qualified her for the Miss America pageant in Atlantic City, New Jersey, where she was honored as 4th runner up, and won a National Talent Award for her rendition of "My Hero" from the 1941 film "The Chocolate Soldier". She was offered contracts by David Selznick and Paramount Studios, but returned to Birmingham without signing.

Actor Mickey Rooney, who'd divorced his first wife, actress Ava Gardner in 1943, had been drafted into the U.S. Army in 1944 and stationed to Fort Sibert near Gadsden. He and other staff from the base accepted an invitation to attend the a benefit showing of "Girl Crazy" on September 23, 1944. While in town, he was introduced to Betty Jane by Birmingham News reporter and "Miss Birmingham" organizer Lily Mae Caldwell

Rooney proposed to Betty Jane that same night , and they agreed to wed before he shipped out to Europe. He later complained to an interviewer that, "I was so f[...]ing drunk, I would have married my drill sergeant." Nonetheless, they proceeded to plan for a quick ceremony. She visited him at Fort Sibert later in the week to finalize arrangements, with help from his commanding officer, Major Harry Jackson. He returned to Birmingham to meet her parents and to attend another special screening, of "Andy Hardy’s Blonde Trouble" at the Empire Theater. 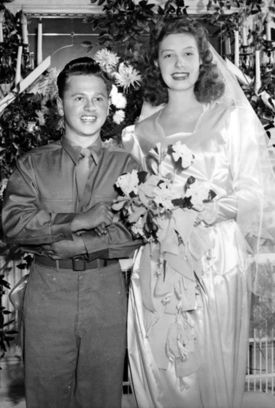 The wedding took place at Major Jackson's residence at 2901 Pawnee Avenue, with Reverend Marvin Franklin of South Highlands Presbyterian Church officiating. The ceremony was briefly delayed while Rooney scrambled to find the marriage license, and the couple spent one night at the Thomas Jefferson Hotel before Rooney reported for deployment to Europe on the Queen Mary out of the Port of New York. During and immediately following the war, Betty Jane lived at home in Birmingham, where their two children: Mickey Jr and Tim, were both born.

Their marriage ended in 1949 as the couple proved incompatible. Rooney recalled that Betty Jane was "totally oblivious to anything going on outside our home." Shortly after the split was formalized on June 4, she was wedded to songwriter and composer Buddy Baker who worked as head of the music department for Walt Disney. That marriage lasted for seven years. They divorced in 1957 and she married jazz guitarist Barney Kessel in 1961, divorcing him in 1980.

Phillips (later Baker), sang with numerous big bands and later appeared on many television variety shows. She was a back-up singer for Elvis Presley on some recordings, including "I Can't Help Falling In Love With You". She also recorded with Lloyd Price ("Staggar Lee"), Sam Cooke ("You Send Me"), Bobby Darin ("Dream Lover"), Frank Sinatra ("That's Life"), Jackie Wilson ("Baby Workout"), the Righteous Brothers ("You've Lost That Lovin' Feeling") and Nancy Sinatra. She also brokered contracts for other backup singers through the Anita Kerr Singers agency.

Baker recorded singing parts for Nancy Kwan in the 1961 film Flower Drum Song and contributed vocal work to Heidi's Song (1982), and to the television specials "The Story of Babar, the Little Elephant" (1968) and "Babar Comes to America" (1971).

Baker died in 2002 of complications of a stroke. She was buried at sea.