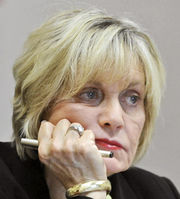 Bettye Fine Collins (born c. 1934) served four terms on the Jefferson County Commission beginning in 1994, including one term as president of the commission before retiring in 2010.

Collins was raised in Cullman County. She graduated from Hanceville High School and earned a bachelor of science from Faulkner University. She was the first woman to be appointed to the Birmingham Board of Zoning Adjustments in 1973. She was appointed to the Birmingham Board of Education in 1974 and served two terms as president before resigning in 1981 when she was elected to an at-large seat on the Birmingham City Council. She was re-elected twice, but was not successful in the 1987 City Council election. During her tenure on the City Council, Collins chaired the committees on Public Safety and Planning and Zoning. In 1990 she was elected to represent District 6 on the Alabama State Board of Education.

Collins was named Birmingham Woman of the Year in 1993. She serves on the advisory board for the Jimmie Hale Mission and has been recognized for her support of the Girl Scouts of America and for Habitat for Humanity. She was also the Alabama Republican Party's representative to the Republican National Committee from 1996 to 2012. Previously she has served on the Birmingham Convention and Visitors Bureau, the Birmingham Regional Planning Commission, the Alabama Commission on Higher Education, the Alabama Public Library Service executive board, the Alabama Tax Reform Task Force, the Upper Cahaba Watershed Consortium, the Birmingham Racing Commission. She served on the board of directors of Operation New Birmingham, the Birmingham-Jefferson Convention Complex, the Metropolitan Planning Organization and the Metropolitan Development Board. She also served on the advisory board for the Alabama Department of Youth Services Vacca Campus, Trinity Medical Center's Women's Advisory Council, and was active in numerous other community, educational, professional and civic organizations.

Collins was elected to represent District 4 in 1994. She opposed the Commission's resolution to approve the 1996 consent decree to settle a federal lawsuit alleging that the condition of the Jefferson County Sewer System was inadequate to comply with the requirements of the Clean Water Act. Often a minority of one on the commission, then headed by Larry Langford, Collins criticized the numerous bond deals being negotiated without competitive bids, but often voted for them when they came before her. She also opposed efforts by Langford to commit the county to support for major capital projects, such as a domed stadium in Birmingham.

During her tenure on the Commission, Collins helped form the Jefferson County Economics and Industrial Development Board, which developed the Jefferson Metropolitan Industrial Park. She also pursued federal Community Development Block Grants to fund senior citizens centers across the county. In 1998 she opposed efforts to construct a new Jefferson County Jail near what was later established as the Turkey Creek Nature Preserve.

Collins assumed the presidency after the 2006 general election which brought a Republican majority to the commission under the slogan "No debt. No dome. No democrats." As president she served as head of the County's Finance and General Services Department, which oversees accounting records, revenues, and public buildings. During her term the Jefferson County debt crisis unfolded, placing the county at risk of the largest bankruptcy by a local government in history. She joined with Democrats Shelia Smoot and William Bell to create a 3-person majority in opposition to her Republican colleagues, Jim Carns and Bobby Humphryes, disagreeing with them on the best course to resolve the issue. Her change of allegiance made her an outcast among GOP loyalists and the county's inability to make progress on its debts left her open to attacks from all sides. In January 2010 she announced that she would not run in the June 2010 election for a fifth term in the County Commission.

Collins' brother, Joe Fine, runs Fine Gettie & Associates, one of Alabama's leading organizer of political action committees. Collins also works as a real estate agent. She was a long-time resident of Trussville's Dew Gardens neighborhood and a member of First Baptist Church of Trussville. Her husband, Bill is deceased. She has two children (David and Kim) and four grandchildren.