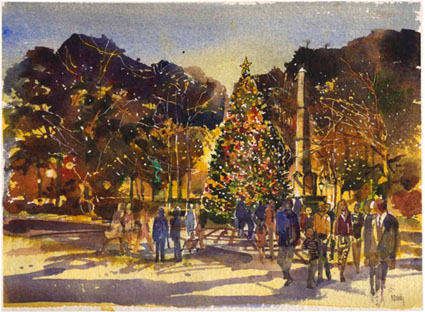 The Birmingham Christmas tree is a large decorated tree displayed during the Holiday season in Linn Park.

A 1947 photograph shows a relatively small Christmas tree displayed near the park's southern entrance. The Birmingham Chamber of Commerce began sponsoring a Christmas tree lighting ceremony in 1948. Santa Claus made an annual appearance on the Friday after Thanksgiving Day to hand out stockings filled with candy while choirs sang carols.

By 1950 newspaper coverage of the ceremony referenced a 35 foot tall living Cedar "permanently" planted at the park. In the following years, the reported height of the tree ranged between 30 and 35 feet. In 1956 it was noted that the tree being decorated that winter was the fourth to be planted in the last five years and the only one yet to have survived the summer.

Another live tree was planted at the park's southern entrance in 1959 as a joint project of the Chamber of Commerce and the Park and Recreation Board. It anchored the northern end of what promoters called "Santa Claus Lane" (20th Street North between the park and Morris Avenue), which was lit by thousands of lights. The cost of the project was shared on an ad hoc basis between the city, the chamber, and additional contributions from businesses. Al DeFuniak led the city's efforts, and Bill Jenkins was contracted for the installation of the lighting.

For a number of years a sleigh-shaped parade float, driven by Bull Connor, would make a nightly circuit down the length of Santa Claus Lane and back, pulling Santa Claus, along with local television personalities and a group of lucky children. Members of the Alabama Clown Association helped work the crowds during the annual lighting ceremonies planned by the Women's Junior Chamber of Commerce.

As the turbulent year of 1963 came to a close, retailer Ferd Weil and the Downtown Action Committee he led took charge of the promotion and greatly expanded the decorating scheme. Holiday lighting was extended along more streets, each given their own theme. 1st Avenue was "Christmas Carol Lane", 2nd Avenue was "Candle Light Lane", 3rd Avenue was "Christmas Scroll Lane", 19th Street became the new "Santa Claus Lane" and 20th Street gained a regiment of giant toy soldiers.

In 1965 Fix-Play Displays president Al Rosenbaum donated a life-size 15-piece nativity scene to the city, which was added to the display at Woodrow Wilson Park. The living tree in the park suffered damage over the years and was replaced with a new one in 1966. To avoid damaging the new tree, lights and ornaments were hung from a gridded cone-shaped steel frame encircling it. That year's celebration included the first official Birmingham Christmas Parade which proceeded down 20th Street to 2nd Avenue, then west one block and back up 19th Street.

In 1967 the Downtown Action Committee added strings of white lights, reported to number over 100,000 in the other trees in the park. But for some reason the installation was rejected by city inspectors, delaying their debut until 1968. That Christmas Minnie Gaston shared the stage with Mayor George Seibels and other dignitaries as a representative of "several Negro organizations" involved in the event. Sing Out Birmingham provided carols while Cousin Cliff Holman and Sergeant Jack handed out candy.

In 1973 the national energy crisis affected the Christmas tree display. A week after the lighting ceremony, the lights on the tree and on the new custom-made street decorations were turned back off in compliance with an order issued by President Nixon. Though the decorations returned, the annual lighting ceremony was suspended between 1975 and 1978. By the end of the 1970s the white lights in the park's 50-plus other trees were in need of replacement with nearly half of them darkened, mainly due to damage to the wiring, which was blamed on squirrels.

Norma Zimmer and Danny Gaither performed at the 1982 tree lighting ceremony. By then, only 40 percent of the white lights were still working. Replacement was deferred as a new group, the Friends of Woodrow Wilson Park, had formed under the leadership of Temple Tutwiler III, and was considering a complete overhaul of the park. The 1966 tree still survived, but was suffering from disease when the decision was made to remove it, helping open the view into the park from the south. The cedar was felled in 1985. 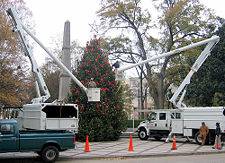 Since the park was renovated and reopened as Linn Park, a cut tree has been brought in each year for seasonal display. The 35-foot-tall North Carolina-grown Norwegian spruce put up in 2010 was destroyed by a fire caused by thieves attempting to remove the copper wiring from the lights. The Cox Media Group, owners of several radio stations in the city, donated a new 35-foot Leyland cypress from the Pine Hill Farms in Tarrant. Craneworks donated their services to erect the tree and area residents were invited to bring ornaments.

In 1940 a "living Christmas tree" in Woodrow Wilson Park was actually a group of choir boys arranged in the shape of a tree serenading passersby with carols.

Other notable public trees in Birmingham include the enormous tree graphic occupying one facade of the 20-story Regions Center building, and a small tree launched on a floating platform into the pond at the Railroad Park in 2010.

In the late 1950s, additional "trees" shaped from lights adorned Vulcan's tower and the south side of the Alabama Power Building. In 1964 the tree at Vulcan park was used to indicate tuberculosis diagnoses during a Christmas Seals campaign to fund free chest X-rays. Like Vulcan's torch turned red for traffic fatalities, a red light on the tree indicated a new diagnosis.