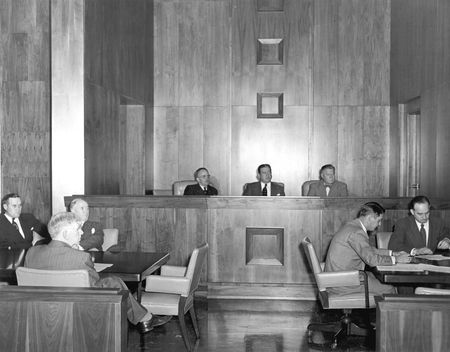 The Birmingham City Commission (or Birmingham Board of Commissioners) was the form of Birmingham's government from 1911 to 1963. The city moved from a Mayor-Aldermen system to a three-member commission at the time that Greater Birmingham was annexed into the City. The idea was that the municipal government should be run less like a small town and more like a business enterprise. The proposal was overwhelmingly favored by voters in a 1910 referendum, and was initiated by a new City Commission election in 1911

The first commission was appointed by Governor B. B. Comer. Culpepper Exum, who had just been elected Mayor under the former system, was appointed president, a position that functioned as Mayor for all intents and purposes, with the term often used interchangeably with Commission President. Like previous administrations, the commissioners were to serve two-year terms, with the first election to be held in 1913. Beginning in 1917 the term was extended to four years to provide for more continuity. Between 1915 and 1923 the board was expanded to five commissioners.

This listing includes the full commission for the years 1911 to 1963, when residents voted to adopt the Mayor-Council Act of 1955 as Birmingham's form of government, providing for a Mayor and nine-member City Council to be elected at-large.

Associate commissioners added, increasing size of board to five

The new board of commissioners was sworn in at a joint meeting with the former board, with both the outgoing and incoming members giving short speeches.