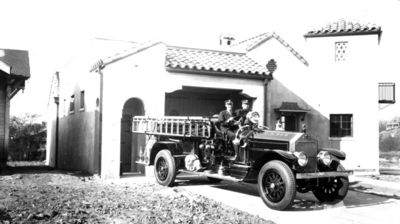 Birmingham Fire Station No. 22 was a fire station located at 3114 Clairmont Avenue. It was built in 1927 in a Spanish mission style to serve the Clairmont and Lakeview areas. The property was purchased in March 1926 from the trustees of Trinity Methodist Church, and building commenced soon afterward. The Spanish-influenced style is similar to Birmingham Fire Station No. 10 in South Avondale, which was designed by architect George Turner.

In 1960 Company No. 22 operated a single 1,000-gallon pumper truck from the station. Before 1976 the original front-facing garage bay was closed in and a new 2-bay garage was added on the 32nd Street side of the building. The original Spanish tile roof had also been replaced with asphalt shingles.

The building was listed along with Birmingham's other Historic fire stations in a multiple property listing on the National Register of Historic Places in 1990.

A recommendation from Firescope, Inc. led to plans to replace Stations No. 22 and 10 with a new combined station. Birmingham Fire Station No. 10/22 was opened on July 1, 2009 at 4439 5th Avenue South in Avondale.

In April 2010 a $6 million proposal was made by Connolly Net Lease of Lawrenceville, Georgia to demolish the former station, a neighboring service station, and Bogue's restaurant to construct a 14,250 square-foot Walgreen's pharmacy with a 62-car parking lot and drive-through window. After neighborhood activists discovered that Walgreen's had an agreement with the National Trust for Historic Preservation to spare buildings on the National Register, the developer agreed to either restore the fire station or leave it alone. In September 2010 Connolly Net Lease affirmed that it would be able to renovate the station for the restaurant and Triple Platinum Salon.

In October 2010, 11th grade students at the Alabama School of Fine Arts, led by teacher Darius Hill, decorated the plywood panels used to board up the station prior to renovation. Walgreen's approved the redevelopment plan in March 2011. The renovated fire station opened in February 2012.