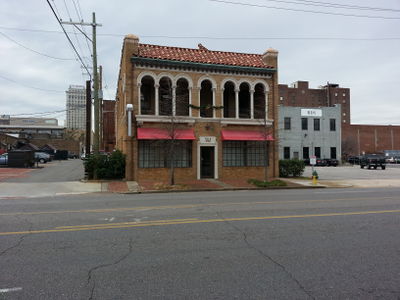 This articles is about the historic station. For the current station, see Birmingham Fire Station No. 4 (2014).

Birmingham Fire Station 4 is a retired fire station that served the "East End" and Terminal Station area from the 200 block of 24th Street North. It was one of several stations constructed in the mid-1920s by the city of Birmingham for the Birmingham Fire Department.

Station No. 4 was designed by architect Bem Price. The two-story brick building featured two large truck bays flanking an entry door. A recessed balcony on the upper level was ornamented with Italian Renaissance-inspired terra-cotta arches supported on thin colonnettes and provided with projecting terra-cotta planter boxes. The pediment roof was provided with a short sloping facade of barrel tiles between two projecting piers at the corners.

The Owens & Woods Partnership purchased the building from the city in 1981 and housed their architectural offices there. In 2010 the property was sold to Sheppard-Harris and Associates accountants. They commissioned renovations designed by architect Jeremy Erdreich.

Fire Company No. 4 relocated to 110 Oslo Circle in the Oxmoor neighborhood in 2014.