As part of its mission to display a comprehensive range of artistic works, the museum's Asian art collection includes works from many periods representing the arts of China, Japan, Korea, India, Tibet and Southeast Asia.

Panorama of the entrance gallery to the Asian collection. Photographed in September 2010 by Wally Argus

A pair of Qing Dynasty ladies' shoes donated by the Progress Study Club were among the first artworks assembled when the Birmingham Museum of Art was established in 1951. Museum director Richard Howard donated his collection of Japanese prints in 1953. The collection grew in the late 1950s with the donation of Chinese lacquerware, Buddhist sculptures and a court robe from Cornelius Love of New York, New York during the museum's move into its current home in the Oscar Wells Memorial Building.

Ben Morton donated a group of Tang dynasty ceramics, including a remarkable horse sculpture in 1961. Belle Comer and Frances Oliver also made notable donations in the 1960s. A number of prehistoric Japanese artifacts was donated in 1971 by David Chase. The late 1970s saw the acquisition of two important collections of jade objects, one from former trustee William Spencer and another from the estate of John Meyer.

In 1972 collector Bruce Sullivan and others interested in cultivating appreciation for Asian art in Birmingham invited Cleveland Museum of Art director and Asian art expert Sherman E. Lee to visit and consult with them on the direction of the Museum's collection and of their own efforts. He strongly endorsed the creation of a Birmingham Asian Art Society and made a suggestion to put a focus on collecting Southeast Asian ceramics, fine examples of which were then on the market at accessible prices.

The Society was organized in 1975 and has since helped nurture the collection into one of international importance. In addition to the ceramics recommended by Lee, members of the society also purchased several contemporary Chinese paintings for the Museum in the 1970s and 80s. Besides acquisitions the society promotes appreciation of the collection by sponsoring visiting lecturers and special events and has established an endowment to support acquisitions and operations.

In 1979 the Collection was given new gallery space in the expanded museum. At the same time a dedicated Curator of Oriental Art, John Seto was hired. In 1982 three major touring exhibits of Asian art were scheduled to coincide with the Birmingham Festival of Arts 1982 Salute to Japan. Five exhibitions were mounted to celebrate the 1987 Salute to China, the same year that Wood arrived as the collection's second curator. Wood oversaw a major reinstallation of the Asian art galleries in 1988.

In 1993 the entire museum underwent a major expansion and renovation, resulting in another reinstallation of the Asian collection into seven new galleries on the upper floor. 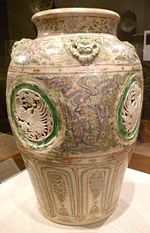 Eighty pieces of blue and white porcelain from the 14th to 19th centuries were donated in 2002 by Thaddeus Crenshaw. The 80-piece Vetlessen Jade Collection is on long term loan from the Smithsonian Institution. Other important pieces have been donated by EBSCO Industries.

Throughout this time the Museum has made its own acquisitions of notable works of all kinds. A Lê Dynasty jar purchased in 2011, was declared the world's 9th most important public acquisition of that year by London's Apollo magazine.

The Chinese and Japanese galleries underwent a major reinstallation after the close of the 2007 "Pompeii: Tales from an Eruption" touring exhibition. They reopened on June 28, 2009 with many more pieces displayed in denser exhibition cabinets. The works were re-organized around four main themes rather than by chronology, providing insight into how technology, transportation, religion and artistic style were represented over the two and a half millennia during which works in the collection were produced.

Organized by the BMA