This page is about the river. For the water park ride, see Splash Adventure. 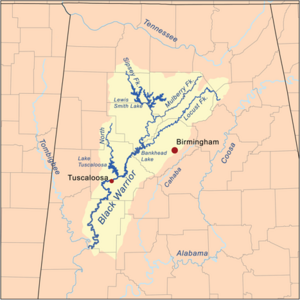 The Black Warrior River, in west-central Alabama, is a 293-mile long tributary of the Tombigbee River. The river is navigable along its entire course, forming part of the extended system of waterways that link Mobile Bay to freight facilities at Port Birmingham. It is named for the Choctaw chief Tascaluza, whose name translates as "black warrior".

Like the Cahaba River, the Black Warrior's entire watershed lies entirely within Alabama. It covers 6,276 square miles, or just over 12 percent of the state. It is separated from the Cahaba watershed by Red Mountain.

The river is formed approximately 25 miles west of Birmingham by the confluence of the Sipsey, Mulberry and Locust forks, which join as arms of Bankhead Lake.

The upper Black Warrior once flowed across numerous rocky shoals, including the extensive Squaw Shoals. But the need for reservoirs, hydroelectric power, and navigable river courses led to its impoundment in a series of narrow lakes separated by locks and dams.

The Birmingham Water Works taps the river at the upper end of Bankhead Lake. Over 600 permitted dischargers add wastewater and runoff to the lake downstream of the water works inlet.

Tributaries in this section are generally low gradient, habitat poor, glide/pool streams flowing through forested land and fed year-round by aquifers. The area includes the Southwestern terminus of the Appalachian Mountain chain and the Cumberland Plateau. The Warrior Coal Fields, located in the plateau, holds Alabama's richest coal deposits.

Bankhead Lake and Holt Lake, formed by the Holt Lock and Dam, encompass the entire course of the river for its uppermost 50 miles, stretching southeast into central Tuscaloosa County, northwest of Tuscaloosa. The North River joins the Black Warrior at Lake Tuscaloosa.

The Black Warrior flows westward past downtown Tuscaloosa, the largest city on the river, then flows generally south in a highly meandering course, impounded for nine miles by the Oliver Lock and Dam, forming Oliver Lake. The Bama Belle is docked in the section of river near downtown Tuscaloosa. The section south of Tuscaloosa, below the fall line, is the "Lower Black Warrior Watershed".

The tributaries in the lower section of the river drain the Blackland Prairie and Flatwoods/Alluvial Prairie Margin regions of the Black Belt. These streams typically cut through the thick loamy-clay soil, revealing chalky bedrock. Fed mostly by runoff, these streams, flowing through deciduous and piney woods, as well as bluestem prairie, are highly variable and often dry in summer.

The last 30 miles of the river are part of the narrow Lake Demopolis. The river flows into the Tombigbee from the northeast near the city of Demopolis in northern Marengo County.

The following endangered or threatened species have been found in the Black Warrior River Basin: