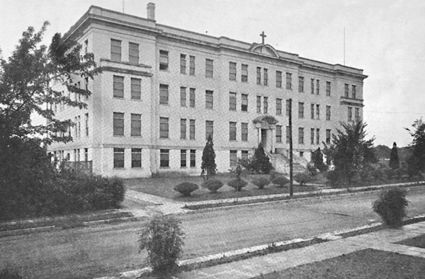 Blessed Sacrament Academy was a Catholic school located at 1525 Cotton Avenue in West End. It was founded by the Sisters of the Perpetual Adoration in 1911 and closed in 1974.

Sister Augustine, Superior General of the order, whose Motherhouse is in Waggaman, Louisiana, visited Birmingham on her way to New York in 1881. According to tradition, she tossed a sacred medal onto a vacant lot near Elyton Station, asking Saint Mary for her blessing to return and establish a convent. She returned, as Mother Augustine, in 1911, at the invitation of Patrick Turner, priest of Blessed Sacrament Parish, to fulfill her mission.

The design for the building was prepared by Hungarian-born architect Albert Olszewski Von Hurbulis, a resident of Washington D.C. who received numerous commissions from the Catholic Church. The 4-story, 141-foot by 100-foot brick building was designed in a stripped-Classical or French Renaissance style. The facade is divided into five bays with the central and end bays projecting slightly, wrapped by a projecting cornice. The central bay has a broken arch pediment topped by a cross and a limestone portal at the head of the entrance stair consisting of an arched pediment supported on Ionic columns with a carved relief of two angels kneeling before a monstrance. The ground floor is clad in limestone with buff-colored brick above. The end bays have subordinate projecting bays on the lower three floors. The rectangular window openings are spanned by limestone lintels.

The central space on the main floor is occupied by a chapel trimmed with Ionic pilasters and a beamed ceiling. The main altar, in a coffered recess, is flanked by side altars on the south wall. The walls and ceiling are decorated with colored stencil-work consisting of medallions and arabesques. The chapel has twelve non-figurative stained-glass windows.

A cornerstone for the Convent of Perpetual Adoration was laid on October 27, 1912 and the building, housing the convent and the school, was dedicated on October 8, 1913. It was the first Catholic high school in Birmingham, serving the upper grades until 1948 when it was converted into an elementary school. The adjacent playing field hosted numerous Toy Bowl games.

The academy, which was the last school operated by the Sisters of Perpetual Adoration, closed in 1980. The property was added to the National Register of Historic Places on December 28 of that same year.

In 1985 the property was purchased for use as the Greater Emmanuel Temple Holiness Church.